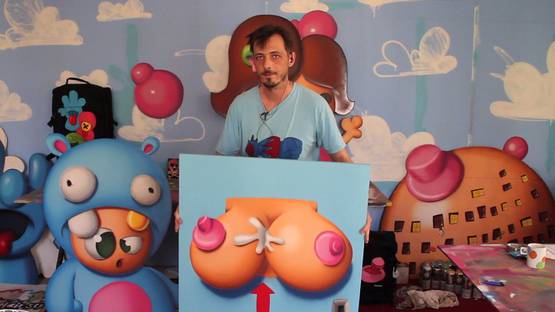 Gum is a moniker of a French urban and street artist, born in 1976. Originally from Marseille, Gum was involved in the street art movement in the 1990s, and, for years now, he ventures into the world of studio works.

Under the disguise of colorful characters and shapes, the world of Gum is primarily subversive. His universe is made out of plastic creatures, misappropriation of large inflatable figures and marketing nymphs. Often in his detailed paintings the plastic-made figures are depicted as melting and dripping, addressed to cause awareness of such themes as global warming and human impact on the natural environment.

Gum’s work focuses on two themes that he sees as being central to the modern lifestyle - consumerism and sex. Importantly, he argues that the only resistance to these two forces lies in the refusal to grow up. All of these ideas are evident in his artworks, in which his figures have a provocative and controversial mixture of childhood references and sexual connotations. The plastic from which these sculptures are made represents the consumerism that grips today’s society.

Most of the paintings are inhabited by some of the most favorite cartoon and video game characters like Sponge Bob and Hello Kitty, with a few randomly placed objects like guns and bombs, giving the paintings a sense of danger in the midst of happy and chaotic times.

Gum subsequently shifted his focus to paintings and other artworks that focus on toys. He now focuses primarily on sculpture and photography to continue this idea of turning the world into his own playground. Gum’s artwork has been featured at exhibitions in Berlin, Brussels, Barcelona and Paris, among others.

The artist lives and works in Paris.