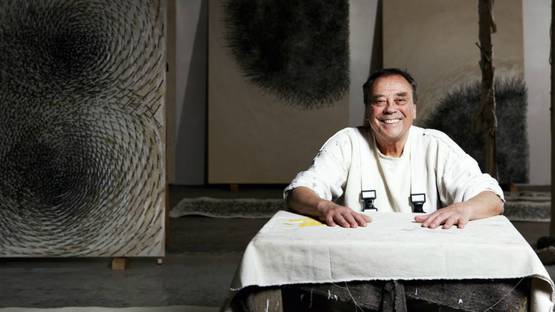 The artist whom one object has definitely marked the whole career, Günther Uecker for the first time used nails as a most important part of his artwork in 1967, simultaneously exploring the avant-garde ideas of Suprematism or Unism. Growing up in the East Germany during the Second World War, these traumatic experiences would later influence, deeply permeate and largely direct his artistic practice, but also the way he faced life. Symbolizing the paradox of “healing by hurting”, the nail refers not only to his personal trauma but has a historical meaning whose clearest example of the ritual use is found in Christianity.

From Social Realism to Conceptual Works and Installations

Born in 1930 in Wendorf in Mecklenburg, Uecker gained his education at the Art Academy of Berlin-Weissensee from 1949 to 1953 where he was directed toward Socialist Realism. Everything changed after his further artistic training under Otto Pankok, famous Expressionist printmaker at the Academy of Art in Düsseldorf. During the 1950’s he started to show the interest in repetitive practice, particularly archery and purification rituals, such as Gregorian chants, gradually developing his own rituals – extensive, repetitive, meditative hammering of nails, implementing the theoretical ideas into his artistic practice. The nails have appeared for the first time in his work in 1957 when he used them on canvas with the aim of creating relief structures. Followed by the implementation of corks and cardboard tubes, his reliefs crossed beyond the boundaries of the two-dimensional pieces that explored the traces of light and shadow produces by destructive act of piercing the canvas. Resulting in the works deeply imbued with approaches of the dominant Expressionism and Informal Art, the artist strived to develop a more concrete relationship between the viewer and the artwork. Modifying his treatment by including kinetic elements and adopting auto-generative organic aspect through the use of the engine, Uecker revealed his 1965 installation New York Dancer which was the first example of these new methods[1]. A column sculpture draped in a piece of canvas with nails hammered like their sharp ends were sprouted on the exterior of the column, were designed to move, rotating around its axis while the nails flew upward with speed.

Uecker's reliefs go beyond the boundaries of the two-dimensional painting that explores the traces of light and shadow, more resembling the sculpture

In 1960, Uecker became a part of the Zero Group, along with Heinz Mack and Otto Piene. They advocated the new beginning of art, as the opposite of the German Informel, considering the fact that, following the horrors of the Second World War, art need to return to a zero degree in order to overcome the violent and destructive experiences. As a result of the joint studios at the Stedelijk Museum in Amsterdam where three artists worked together emerged the installation Salon de Lumiere showed at the Palais des Beaux-Arts in Paris. Exploring the medium of light, Uecker researched optical phenomena and structures that included the viewer into the visual process by kinetic or manual intervention[2]. During the years, the artist created numerous of different artworks with hammered nails using the pieces of furniture. After the split-up of the members of the Zero Group in 1966, Uecker once more changed the direction of his interests, this time toward Conceptual and Land Art, designing the stage sets for several operas. Beside exhibitions with the Zero Group, the artist’s work participated in a number of important shows, such as Venice Biennale (1970) and his first solo exhibition when the American audience had a chance to see his kinetic New York Dancer was held at the Howard Wise Gallery on West 57th Street in 1966.