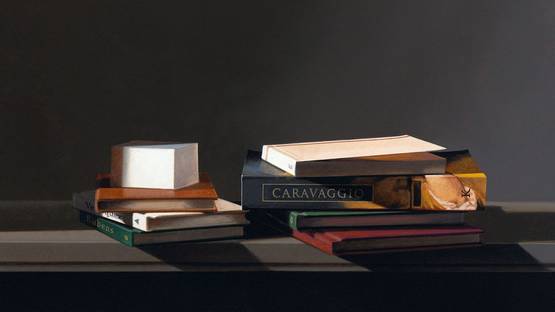 Guy Diehl is an American painter, born in 1949 in Pittsburgh, Pennsylvania. He is famous for his still life paintings and prints. His works usually make a reference to historically important artworks and artists.

Guy Diehl received his BA in 1973 from California State University East Bay, Hayward, CA, and his MA in 1976 from San Francisco State University, CA. Not everything started great for Diehl in the world of art – as a kid with dyslexia, his early self-expressions were met with criticism rather than acclaim. His parents didn’t have faith in his ability to create art, considering problems with simple tasks, like reading. Diehl’s disorder and anxiety pointed him in the direction of realism, where he received positive recognition.

Diehl sees himself as an interpreter, and considers his work to be turning the observations into art. These observations are intuitive, as well as responsive to images within the composition. As the artist confesses, the satisfaction with his work comes from the ability of his art to capture significant appearance of the subject matter, even though his paintings are as minimal as possible. Since the 80’s, the book has been the focus of his work. Diehl uses the book as a vehicle to add commentary aspect to the subject matter and act as unifier to the whole. The artist begins with a photograph that he took. For his most famous series, The Still Life, the subject matter is brought together and photographed, later reviewed in its variations, so the artist can determine is it suitable for a good painting.