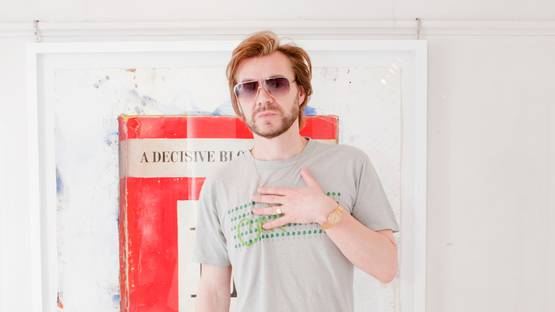 Harland Miller is a British artist born in 1964 in Yorkshire, UK. He is a notable artist and writer who has contributed to the Abstract Art and Figurative Art movement in the 21st century. Miller earned his BA and MA in Art History from the Chelsea College of Art in London, UK. After receiving his degrees, Miller traveled extensively throughout Germany and the United States.

He moved to New York, where he lived and worked for several years whilst exhibiting at the Prisunic Gallery. In 1992 he moved back to Europe, first to newly reunified Berlin where he began writing. By 1994 he was living and working in Paris, where he exhibited at the Galerie Louis XIV. After more extensive travels Miller eventually returned to the UK in 1996 where he carried on writing as well as painting. In 2000, Miller achieved critical acclaim for his first novel, Slow Down Arthur, Stick to Thirty, which featured a young boy who travels around England on adventures with a David Bowie impersonator. In 2001, the artist painted a series of paintings based on the covers of Penguin classic dust covers. In this series, Miller combined Pop Art, Abstraction, and Figurative paintings. He continues to create works with this theme. Miller was named the Writer in Residence at the Institute of Contemporary Art in Boston, MA, in 2002. This was followed by his first one-man show, To Jean – A Small Memento of a Great Effort, at the White Cube Gallery in 2003. Miller combined both writing and painting when he curated a group show at the White Cube gallery, You Dig The Tunnel, I’ll Hide The Soil, in 2009, to commemorate the 200th anniversary of Edgar Allan Poe. Poe has been a consistent source of inspiration to Miller's work. The exhibit was housed in two separate venues in London. Some of his notable solo shows include Dear Son, This Is One Of The Last Of My Few Remaining Pre-Marital Possessions – Look After It Won’t You…Love Dad, Marian Boesky Gallery, New York, Don’t Let The Bastards Cheer You Up, The Baltic Museum, I’ll Never Forget What I Can’t Remember, The Reflex Gallery, Amsterdam, Butterside Down, Galleria Maribini, Bologna.

Miller lived and exhibited his work in New York, Berlin, and New Orleans. He currently lives and works in London.