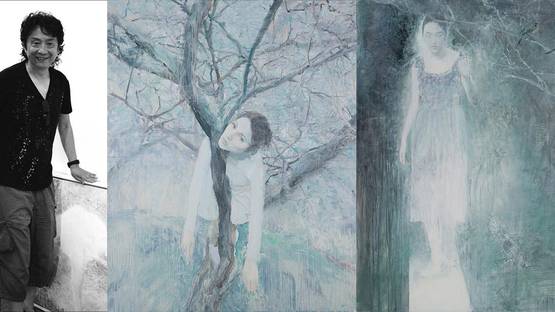 He Duoling (1948 Chengdu) is widely believed to be one of China's most talented realist painters. Along with Chen Danqing and Luo Zhongli, He Duoling has been creating realist masterpieces since the 1980's.  Known for his oil paintings of nude women and images of minorities in rural settings, He Duoling exemplifies this group of painters. Besides his sensuous nude photographs, in his work also prevail images of minorities in southwest China and people in the west countryside, away from China's booming coastal areas.

He Duoling got his master degree from the Oil Painting Department of Sichuan Academy of Fine Arts in 1982.

His description of the female body is continuous and persistent. Further, He enjoys eschewing mainstream trends across the contemporary art world. In 2007, he created ten oil paintings to be debuted at the China Blue Gallery in Beijing—while other artists created sequential paintings, He painted ten separate pictures.

In one of He’s most important works, “Youth 2007,” the figures in the painting face away from the audience, exposing only their bare backsides. The image does not appear cartoonish or exaggerated, but nevertheless imprints a sense of ambiguity on the viewer. Some suggest this ambiguity is meant to expose the artist, himself, and his inner world. Despite the somewhat crude subject matter, the painting does not so much offend as offer a sense of happiness and freedom.

He made his international debut in the French Spring Saloons exhibition at the Louvre Museum in Paris in 1982. Six years later, he held his first solo exhibition at the Fukuoka Art Museum in Fukuoka, Japan. Most recently, in 2008, he presented his 2007 New Works Exhibition at the China Blue Gallery in Beijing. He is currently a member of the China Realism Painting Group. He teaches in Sichuan Academy of Fine Arts in Chongqin now.