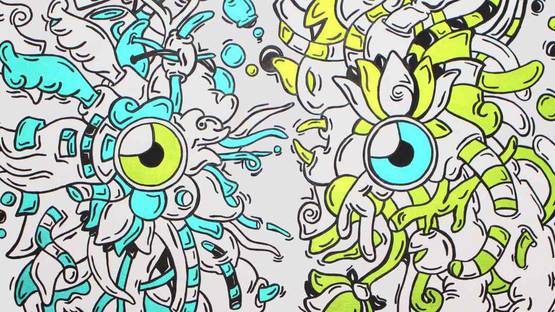 Helen Roowalla, better known as Hero, is visual artist of Persian and Indian origin. She was born in Switzerland in 1980 and raised there until the age of 15, when she moved to the United States to complete her education. Hero currently lives and works in Switzerland. She has been actively painting since 2009 but has been drawing all her life. She began her career by painting large-scale insects in oil. Later she moved on to portraiture, with a touch of surrealism, still utilizing oil as her preferred medium. In 2013 she began experimenting with abstract painting, and finally developed her signature pop art style, and embraced acrylic as her new medium of choice. Her style is characterized by bold lines and bright colors. Her lines are curved, almost cartoon-like, and the shapes organic and full of movement.