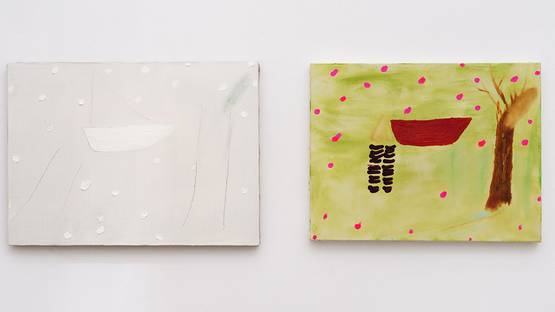 Hiroshi Sugito is a Japanese painter who gained international recognition in the context of the Tokyo-Pop movement. His compositions are comprised of both abstract and concrete recurring motifs, often stylized beyond immediate recognition. In other works, Sugito creates alternate visualizations, for example, of sounds or nature but he is also known for usage of translucent layers.

He was born in Nagoya, Japan in 1970 and spent his childhood in the United States. Sugito returned to Japan in 1986 and met Yoshitomo Nara, one of the founders of the Tokyo-Pop movement, from whom he took lessons in drawing in preparation for his studies in art. In 1992, Sugito graduated from the Aichi Prefectural University of Arts in traditional Japanese-style painting.

Hiroshi Sugito’s work tends to focus on Japanese painting with a Western influence. A lot of his imagery has a sense of “Kawaii”—which means "cute" in Japanese—and intertwines this idea with a sense of weirdness or eerie displacement. His paintings depict imaginary, dreamy scenes that seem to originate from memory and childlike fantasies. Separate from the ‘Super Flat’ aesthetic of many of the Tokyo-Pop artists, who draw their inspiration from manga comics and animé films, Sugito’s work is rooted in a contemporary Japanese aesthetic and in the traditional painting style of Nihonga. His recurring themes, such as mountaintops, waves, blossoms, and birds, as well as military airplanes, missiles, or fire, are often hovering with vibrating colors and vaguely discernible objects.

He currently lives and works in Nagoya, Japan.