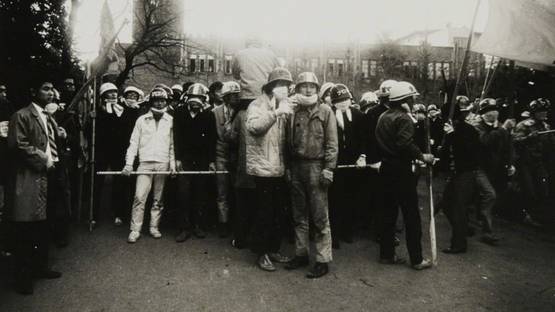 A Japanese photographer, Hitomi Watanabe came to prominence during the Zenkyoto student movement in the late 1960s, participating in the 1970 Anpo protests against the renewal of the Japan-US Mutual Security Treaty.

Born in 1939 in Tokyo, Japan, she graduated from Tokyo College of Photography as the only female student. She began her career photographing the streets of Shinjuku, a Tokyo neighborhood which was home to Japan's 1960s counter culture. Soon, she became involved with the Zen-kyoto student movement, which occupied the University of Tokyo campus in 1968-69. Her black and white, candid photographs lend a strikingly relatable perspective to the struggles and everyday lives of the protesters, while providing an insider’s vantage on this tumultuous moment. In 1972, she began traveling through Asia for the next 25 years, visiting India and Nepal. Since returning to Japan, her photography has been essentially a spiritual document as a message to “Living Spirits”.