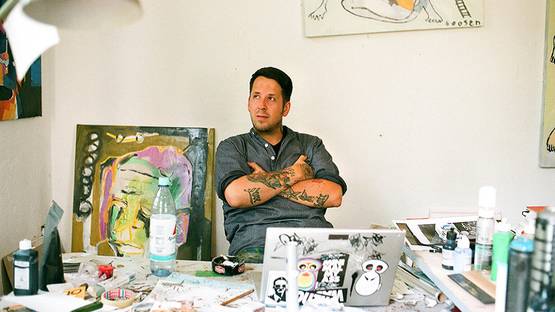 Christian Hans Albert Hoosen is Berlin-based artist born 1981 whose drawings, paintings and collages conjure up countless stories and a huge variety of associations. Full of grandiose metaphor, imagery, color symbolism and sometimes shocking moments, they call to mind expressionist poetry. They provide an open forum for our thoughts and shared experiences—thus functioning as a kind of collective memory and as a mine of history and culture. It is precisely in their universality that the mysterious accuracy of these works lies.

The garish colors and multiple layers of hurriedly sketched motifs and forms create a chaotic visual flurry, the meaning of which is often only revealed after careful study. HOOSEN’s works are full of eccentric characters; wondrous beings, grimacing faces and comic-like figures, and these elements all mingle and intertwine to create wild, self-contained universes. His pieces present an eclectic mix of private worlds and seemingly unremarkable moments from everyday life. The images are a maelstrom of metaphors that hold social conventions up to view and thus open them up for discussion.

HOOSEN composes sketches of the human condition that evoke the melancholy of failure and imperfection. His portraits and figures stare vacantly at a world that presents them with nothing but the impossibility of fulfilling their desires. There is often only the hint of a location in these pictures, as Hoosen allows his subjects to dissolve into an imaginary realm. He places them against a surreal, fantastical backdrop, thereby granting them only a real unreality in a world of unreal realities.

About the exhibition at Kunstverein Hamburg which presents recent pieces from the last two years, including a range of works on paper that resemble fictional concert or exhibition posters HOOSEN said: "These scenes just come to me. All I do is frame the stories and buy the paint." Although there are no details of time or place, meaning that the posters have no informational purpose, they nevertheless have a highly persuasive advertising effect. On the opposite wall, a multitude of different painting techniques and for-mats are displayed together in a salon hang that demonstrates the broad range of his oeuvre. This display is flanked by large-scale works on canvas and paper, which look like out-of-control comic strips with their wildly flourishing brushstrokes.