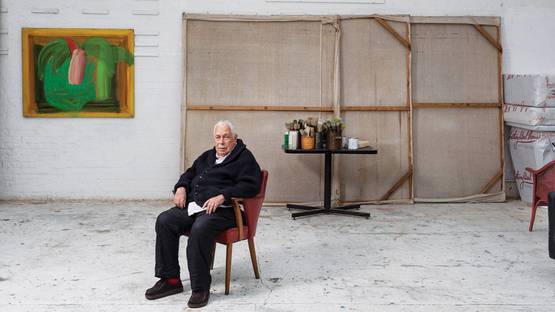 The very idea of abstract representation deeply moved Howard Hodgkin and over the years his impressive body of work became characterized as one of the finest examples of post-war modern art from the Islands. The continuous interest in intense relations between pictorial elements, the very perception of a painterly surface, color and forms, suggest the artist's desire to explore different layers of meanings and emotions. The flow of time did not discourage him to change the media or decrease his activity. Nevertheless, the ideas of Howard Hodgkin grow and developed so it is no wonder that his artistic practice reached really high range.

The Artistic Development of Howard Hodgkin

Gordon Howard Eliot Hodgkin was born in 1932 in London. He was raised in highly educated and well-ranked family – his father was a manager for the chemical company and a noted amateur horticulturist, and a mother, a botanical illustrator, and some of his ancestors were established members of British society. During the Second World War, Howard Hodgkin was evacuated with his mother and sister to the USA, where they lived in New York. After the return to the UK, he was educated at Eton College and then at Bryanston School in Dorset. Later, the artist studied at the Camberwell Art School[8] and later at the Bath Academy of Art in Corsham.

Howard Hodgkin has developed specific approach to coloring and forms

The artist was rather determined to devote himself fully to art in early childhood and even ran away from school to pursue this. Despite all the obstacles, Howard Hodgkin was able to manage his first solo show in London in 1962. His early works from the 1950s and 1960s include stylized figurative scenes and landscapes, depicting specific emotional experiences and significant personal interactions using his unique visual vocabulary. Around the beginning of the 1970s, Hodgkin’s style became more spontaneous, with vaguely recognizable shapes presented in bright colors and bold forms. His works may then be called semi-abstract, and are often compared to the paintings of Henri Matisse.

The depths of abstraction

The Great Achievements of Howard Hodgkin

In 1980, Hodgkin was invited by John Hoyland to exhibit work as part of the Hayward Annual at the Hayward Gallery. His career was burgeoning at the time, and in 1984 Hodgkin represented Britain at the Venice Biennale, while in 1985 he won the Turner Prize. Finally, the last act of official recognition happened in 1992 when he was knighted. A decade later, he was appointed by Queen Elizabeth II as a Companion of Honor, while in 2006 a major exhibition of his work was mounted at Tate Britain. The same year, The Independent declared the artist one of the 100 most influential gay people in Britain, as his work has helped many people express their emotions to others.

The bright and vivid colors were Hodgkin's forte

Although that was not apparent at first glance, the works always had a subject and they were not abstract and Hodgkin often commented how he had never painted an abstract work in his life, that he was an “a figurative painter of emotional situations”. Namely, the works were usually guided by the construction of pictorial space using expressive brush marks and lush colors, almost always painted on the backs of old picture frames. The love for French artist’s like Degas, Vuillard and Bonnard affected his sensuous, intense paintings, as well as frequent travels to India.

One of Britain’s greatest contemporary artists

The Notable Legacy of Howard Hodgkin

Through the years, the artist became best known for his vibrantly colored paintings that chronicle his personal experiences, and such a consistency made him recognizable. The idea of sticking to the same approach is transferred on another aspect of his practice - the hand-painted etchings were realized with the same master printer and print publisher for the last 25 years. Hodgkin has exhibited his work at the Tate Britain in London, The Metropolitan Museum of Art in New York, and the Museum of Modern Art in Oxford. Howard Hodgkin did not just belonged to a generation of artists who came to prominence in the late 1950s and early 60s, like David Hockney or Peter Blake, but has remained active, focused and precise despite the fact his success came later. The artist’s outstanding contribution to the post-war modern art movement is of great importance and complete insight in his work is yet to be discovered.

Howard Hodgkin passed away in 2017 in London.