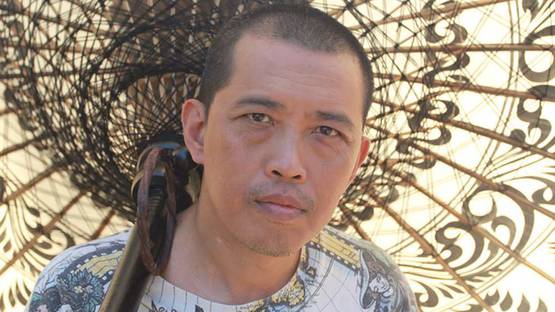 Htein Lin is a Burmese painter, performance artist and writer, and has also been a comedian and actor. Born in 1966 in Ingapu, Ayeyarwady Division, he was active in the 1988 student movement at Rangoon University where he studied law. Going underground after the military takeover, he spent almost four years in a refugee camp on the Indian border, where he studied art with Mandalay artist Sitt Nyein Aye, and in an ABSDF, Northern Branch, student rebel camp at Pajau on the Chinese border. In Pajau, he and other students were detained for around 9 months from 1991 to 1992 and suffered physical abuse at the hands of other students in the most notorious episode of the opposition group’s history.

Escaping and returning to Yangon in May 1992, he finished a law degree in 1995 before taking up work as a film actor. He held two solo shows in 1996 and 1997. Arrested in 1998 and jailed on spurious accusations of opposition activity, he spent almost seven years in jail, between 1998 and 2004. During this time he developed his artistic practice, using items available to him like bowls and cigarette lighters in the absence of brushes to make paintings and monoprints on the cotton prison uniform.

Htein Lin pioneered performance art in Burma in 1996 and continued to perform for fellow inmates while in prison. Following his release, his Rangoon street performance "Mobile Art Gallery/Mobile Market" in May 2005 led to 5 more days of interrogation. During the period between 2006 and 2011 he also performed in the UK and Thailand, at the US Library of Congress and at festivals and events in Finland, France, Philippines, Japan, Malaysia, and Bangladesh. Many of his performances are intended to raise awareness of the political situation in Burma.

Since leaving Burma for the first time in 2006, Htein Lin regularly participates in exhibitions and art festivals globally, as well as events and projects to promote freedom of speech, particularly in Burma. He is a founding member of the Burmese language arts website www.kaungkin.com to which he contributes poetry, prose, and artistic criticism. In 2010 curated the first Burmese Arts Festival in London. In recent years he has expanded his practice to include 3D work and video.

Htein Lin practises vipassana meditation for several hours daily, and a major inspiration for his work is Buddhism whose themes, stories and philosophy he incorporates in his art. He moved back to Burma in July 2013, having lived in London from 2006-2013. Since returning, he has taken advantage of the new reform atmosphere to embark on a major documentary and participatory performance piece, A Show of Hands, capturing in plaster the arms of hundreds of Burma’s many thousands of former political prisoners.

Two of Htein Lin’s paintings were purchased for the US Embassy in Yangon, opened in 2007. Others are in private collections in Belgium, Netherlands, Hong Kong, India, Singapore, Spain, Sweden, Thailand, US and UK.