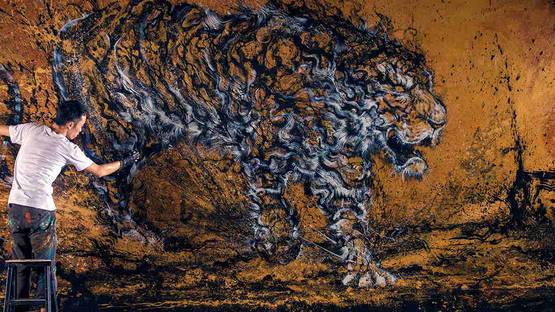 Nature and animals as its representatives bring with them an unparalleled force in whichever context they are mentioned. Coming in all sorts of shapes and sizes, there’s a certain mystery surrounding even the most audacious of species that makes them an ideal subject for any sort of canvas. Paying great attention to detail, Hua Tunan brings forth this ubiquitous mixture of power and beauty present in nature, painting stunning images both on canvas and street walls. Though still young, his undisputed technical skill makes him one of the prominent contemporary artists to be followed in the current art world.

Looking at any of Hua Tunan’s art pieces, there really is no single specific spot that can be said to draw the attention - every single dot of the painted surface is stunningly depicted, working together in harmony of vivid colors. One could let his or her gaze wander across the piece and always find yet new, unexplored, and breathtaking details soothing the eye. Naturally, there’s a lot behind such a depiction: Tunan owes it to great dedication, technical mastery, as well as the unique “cross-breed” style formed out of the traditional Chinese ink painting and the abstract splatter style. Furthermore, Tunan uses a number of different tools in his practice, anywhere from spray cans and brushes, even his hands, all transferring the energy into the piece that ends up truly radiating.

Using a number of different tools in his practice, Tunan transfers the energy into his pieces

With so much effort invested into each piece, there’s no escaping the raw energy emitting from the canvas. The attention to details carries across the pure animal instinct, presenting nature in its majesty, undisputedly powerful and beautiful. Much akin to Jackson Pollock’s splash style, Tunan encompasses his subjects with splashes of paint, adding to their mystery and blending them with the surroundings. Whether he paints on the wall or the gentle surface of the canvas, there’s always a feeling of motion to the piece and an individual quality to each of the subjects, making them unique on every portrayal.

Tunan presents nature in all of its majesty, undisputedly powerful and beautiful

Nature Amongst the Concrete

With his work adorning the cities from America to Asia, both in the streets and within gallery walls, Hua Tunan truly brings the nature to the concrete jungle of the urban environment. Vividly depicted, each of his works can almost be physically felt as the detailed pieces allow for and demand a prolonged immersion from the viewer. Building a practice that is still on the rise, the young Chinese artist has successfully merged the tradition with the Western ways of graffiti art, creating a unique style that is etched in the entirety of his oeuvre. Having already worked with world-famous brands, there’s anything but enough of Hua Tunan’s artwork.

Hua Tunan’s studio is based in Foshan, China.

Featured image: Hua Tunan working on a piece. All photos credit the artist.
All images used for illustrative purposes only.