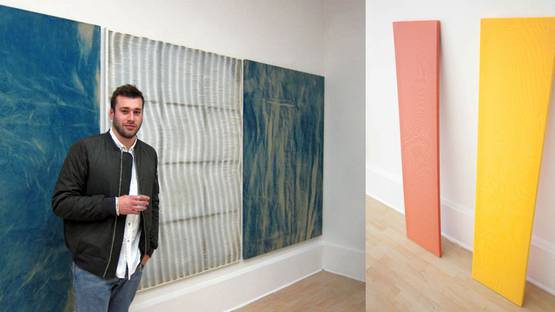 Hugh Scott-Douglas is an emerging artist who has become known for his affecting and conceptually rigorous projects. Born in 1988, in Cambridge, England, Scott-Douglas moved to Edmonton, Canada, with his family as a young child, and later grew up in Ottawa.

In his late teens, he studied briefly in the pre-college program at the Pratt Institute in Brooklyn before completing his BFA in sculpture at OCAD University in 2010. There, he counted Ian Carr-Harris, George Boileau and Ginette Legaré as influences. His thesis exhibition, “An Invitation To Lubberland” attracted considerable interest for its cohesive melding of painting, monoprints, sculpture, furniture, lamps and installation elements.

He is best known for his cyanotype prints on textiles, which rely on an outmoded form of film development produced by the sun rather than artificial light. Scott-Douglas first designs a patterned motif using computer-generated algorithms, then prints it onto film and exposes it to sunlight over a textile such as canvas, the chromatic variation of the resulting blue-toned images reflects the changing environments they were produced in. He repeats his motifs in different series and materials, including slideshows and laser-cut images.

Beyond creating his own works post-graduation, gaining note in particular for his cyanotype prints on textiles, he also curated group exhibitions and established Tomorrow Gallery with fellow OCAD alumni Tara Downs and Aleksander Hardashnakov. His work has been exhibited in Los Angeles, New York, San Francisco, London, Toronto, Paris and Basel, and is a part of museum collections such as Dallas Museum of Art and Eli and Edythe Broad Art Museum in East Lansing, Michigan.

He lives and works in Brooklyn.