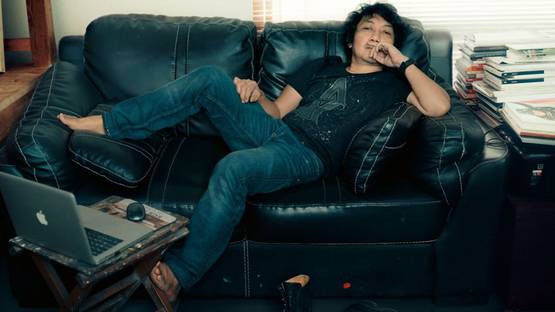 I Nyoman Masriadi is a painter and a leading artist of the post-Suharto era in Indonesia. The visual imagery and narratives he uses for his paintings are derived from keen and intelligent observations of social life and behavioral traits.

Something of a phenomenon, his career is a rags-to-riches story combining creative genius, cultural sensitivity, and a refusal to conform. Masriadi’s paintings frequently depict superhuman figures whose narratives, while rooted in Indonesian cultural history, offer witty and often biting social commentary on contemporary life and global pop culture.

Masriadi’s visual vocabulary is continuously refreshing and contemporaneously relevant. As Ashley Bickerton explains; ” Masriadi’s work is decidedly of this moment. This is Indonesian art coming clearly into its own. Although we see many artists today succumbing to a convergent globalised style, Masriadi’s work has managed to fuse many divergent and distinct rhythms into one of the clearest and most Indonesian of voices”.

“Masriadi: Black Is My Last Weapon,” was the artist’s maiden solo show at the Singapore Art Museum and spanned Masriadi’s 10-year career, exploring the evolution of his signature black-skinned figures, a motif now widely copied by other Indonesian painters. Nicholas Olney, director of New York’s Paul Kasmin Gallery, recalls his initial impressions of this exhibition: “The humor and biting wit came through immediately,” he says. “This guy was speaking on a global level.”

Through his expert control of light, shadow and volume, Masriadi endows the monumental characters of his artworks with a sculptural, almost three-dimensional presence. Sometimes these characters appear in the archetypal roles of comic book heroes, cowboys, soldiers and athletes, but just as frequently, they are simply powerfully built men and women engaged in solitary acts of strength or captured in private moments of vulnerability.