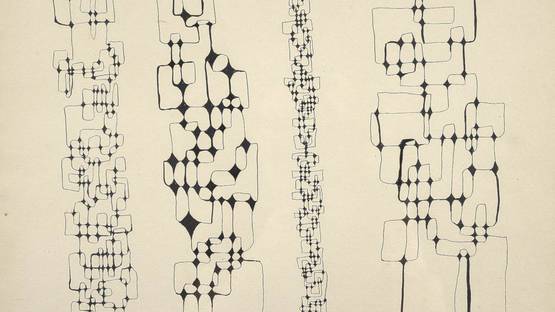 A Russian-American sculptor, Ibram Lassaw is best known for non-objective construction in brazed metals. One of America's first abstract sculptors, he pioneered an innovative welding technique that allowed him to create dynamic, intricate, and expressive works in three dimensions.

Born in 1913 in Alexandria, Egypt, then part of the Ottoman Empire, to Russian-Jewish parents, Lassaw arrived in New York at the age of eight and became a citizen in 1928. There, he attended The Clay Club founded by Dorothea Denslow at the Brooklyn Children’s Museum, where he learned classical sculpture techniques such as clay modeling and plaster casting. The International Exhibition of Modern Art, organized by Katherine Drier and the Société Anonyme, at The Brooklyn Museum, served as a formative experience for him, describing him as "Future Shock".

Lassaw was a key force in shaping New York School sculpture. Believing that the future of sculpture was in open space and the use of materials for its “self- color”, he created work that he described as "action sculpture", since it grew without a plan, moment by moment. Inspired by internal structures found in nature, cosmology, astronomy, and technological construction, Lassaw created sculptures with complex interiors that aimed to entice viewers to lose themselves within them.