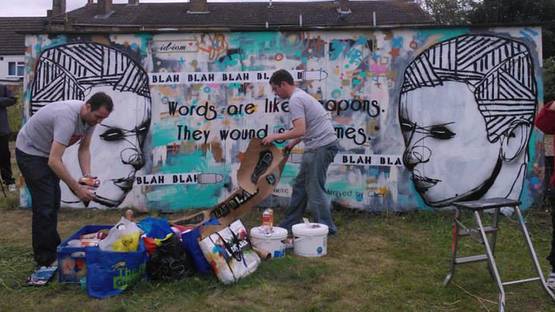 Id-iom are a collective based in Brixton. Originally from the Isle Of Man, brothers Hugo and Sholto adopted their name from their late, father's art supplies shop. However, their father was not the only person to influence them in their lives. Their mother was a seamstress, and their older brother was the person responsible for exposing them to graffiti culture. With a creative gene running in the family, it is unsurprising that Hugo and Sholto have taken the path they have. Since moving to London, Hugo's and Sholto's work has developed and progressed ten-fold, with unique techniques and styles which ensures that their work is recognizable and stands out from the crowd.

Id-iom have made their mark. With their studio situated in the basement, and their canvas being the entire building, the two brothers have established a creative hub that has no limits or restrictions. They are determined never again to suffer under the yoke of an oppressive employer, and have chosen the fickle world of art and design to implement a full spectrum dominance of the global economy. An example of the subversive nature of their work is the ‘Back to the Future’ mix tape project, which sees Id-Iom combine two of their loves – music and street art.

Both members of id-Iom have been DJ-ing for years and, rather than go the inevitable route of uploading their mixes to Soundcloud and have no-one listen to it, they’ve attempted to fuse their street art activities and proclivity for making mix tapes. Id-iom secure a copy of their mix CD to a standard roofing slate, creating art to compliment the tunes, and sign it on the reverse with their trademark Id-Iom stencil and logo. From there it’s just a matter of putting it on the street and seeing what happens. Free Art Friday with a musical twist.