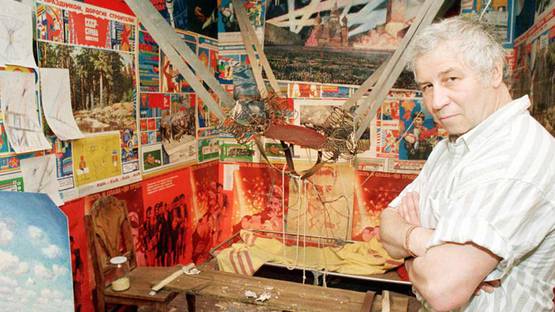 Ilya Kabakov is a Soviet-born American conceptual artist. He is considered one of the most important Russian artists of the 20th century.

He was born in Dnepropetrovsk, Ukraine, but evacuated to Samarkand, Uzbekistan, to avoid capture and Nazi persecution.  From 1945 to 1951, he studied at the Art School, Moscow; in 1957 he graduated from V.I. Surikov State Art Institute, Moscow, where he specialized in graphic design and book illustration.

Throughout his forty-year plus career, Kabakov has produced a wide range of paintings, drawings, installations, and theoretical texts — not to mention extensive memoirs that track his life from his childhood to the early 1980s. In recent years, he has created installations that evoked the visual culture of the Soviet Union, though this theme has never been the exclusive focus of his work.

Kabakov showed a promising talent in drawing, and was accepted into the Leningrad Institute of Art, which moved to Moscow shortly after he began. While at school, Kabakov was uninspired by the classical Russian art and Socialist Realism that was considered the official art of the Soviet Union. He graduated from Surikov Art Institute in 1957, and became a children’s book illustrator; since having an artistic license was prohibited, this was the only way Kabakov could make a living as an artist. During this time, he shared a studio with fellow artist, friend, and great influence, Ulo Sooster (Estonian, 1924–1970). In the 1970s, he started experimenting in Abstract Expressionism and neo-Surrealism, and by 1978 he worked as a Conceptual artist. His success placed him in the center of the Moscow Conceptualists, recognized today as an important Soviet avant-garde group, but was then harassed by the KGB.

Kabakov was unable to exhibit his art in public spaces, so he held private shows in his apartment. He began “performing” his “albums”—collections of his drawings—reading them allowed as stories, and in 1982 started creating installations. These installations incorporate three-dimensional imagery in spaces that the audience could interact with. In 1985, he traveled to Paris for his first solo exhibition at the Dina Vierny Gallery, and later moved to Austria for a six month residency at the Kunstverein in Graz. He represented Russia at the 1993 Venice Biennale, and lives and works with his wife in Long Island.