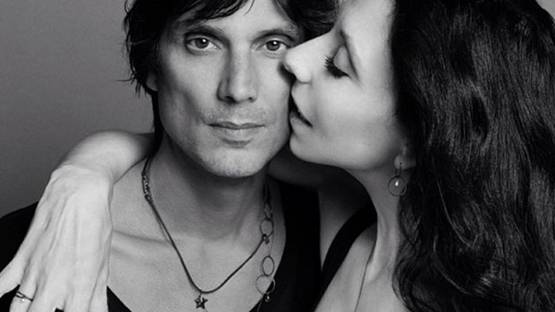 Inez van Lamsweerde & Vinoodh Matadin  are a Dutch fashion photographer duo, known for their work for fashion magazines, advertising campaigns, and for their independent art work.

For over 25 years, Inez van Lamsweerde and Vinoodh Matadin have worked in the field of fashion photography. Working together since 1986, the award-winning Dutch partnership has built a collection of work. They have staged exhibitions and collaborative projects, participated in international group shows and their artworks are held in private and museum collections. Inez and Vinoodh live in New York with their son, Charles Star Matadin.

Inez and Vinoodh met at the Vogue Academy of fashion design in their hometown, Amsterdam, where they both initially studied fashion design — Vinoodh from 1981 to 1985 and Inez from 1983 to 1985. Inez took a Masters degree in photography at the Gerrit Rietveld Academie (1985–90) and Vinoodh founded the Lawina clothing line with his classmate Rick Bovendeert. A commission for Inez to photograph the 1986 Lawina collection led to Vinoodh beginning to work with her, first as a stylist and eventually in 1995 as co-author of the images they produce together. The Lawina label closed in 1990 when Inez graduated and the pair began practicing as artists. A year-long residency awarded to Inez by PS1 Contemporary Art Center in New York from 1992 to 1993 marked the beginning of a period of experimentation with digital technology, leading to a collection of sequences about computer manipulation. Using Paintbox software to smooth out and remove the nipples and orifices of nudes,Thank You Thighmaster (1993) aimed to illustrate elegance and horror. Final Fantasy (1993) attempted to focus upon child sexuality by digitally grafting the mouths of men onto the faces of toddler children.

As Inez and Vinoodh’s notoriety burgeoned in the art world, the fashion community became equally captivated by their early editorial assignments for the style magazine BLVD in Amsterdam, where the two were now living. A breakthrough story republished as For Your Pleasure in British style magazine The Face in April 1994 added high-octane glamour to the dark and unsettling tenor of their work and marked them engaging with fashion explicitly as the subject of their work. Collaborating with Belgian designer Véronique Leroy, they formulated a visual vocabulary of slick, predatory figures, shiny surfaces and erotic poses that they set against hyper real backdrops constructed from stock, picture library imagery. The resulting tableaux flew in the face of the prevailing taste for documentary-centered style photography, pre-empting the end of the so-called “grunge” aesthetic and earning Inez and Vinoodh all-important editorial commissions for elite fashion magazines Visionaire and Vogue together with their first advertising contracts for luxury brands Hervé Léger and Vivienne Westwood.

Inez and Vinoodh returned to New York permanently in 1995 to meet ever-increasing demands for them as assignment photographers and they have been prodigious in their output ever since extreme gesture.

Since their breakthrough digital work of the early 1990s, Inez and Vinoodh have maintained a prolific art career, staging solo shows every two or three years. The Forest (1995), an unsettling series in which the features of men were grafted onto women’s bodies, posing questions about gender, toured to four international venues, while The Widow’s 1997 tour concluded at the prominent Matthew Marks Gallery in New York and signified the beginning of the photographers’ relationship with the gallery. A solo show of portraits of Inez and projections of herself onto those closest to her, ME (1999), was produced in the same year that an additional body of work on identity and loss was initiated. The Me Kissing Vinoodh series (1999–2010) has come to be one of Inez and Vinoodh’s most recognized projects and demonstrates how elements of their artwork find their way into commercial projects and back again.

Recently, the many strands of Inez and Vinoodh’s career have been drawn together in a series of major retrospective outcomes that celebrate their 25 years’ outstanding work. The limited edition book represents the definitive survey of Inez and Vinoodh’s vast body of work and illustrates their continuing influence on the spheres of art and consumer culture.