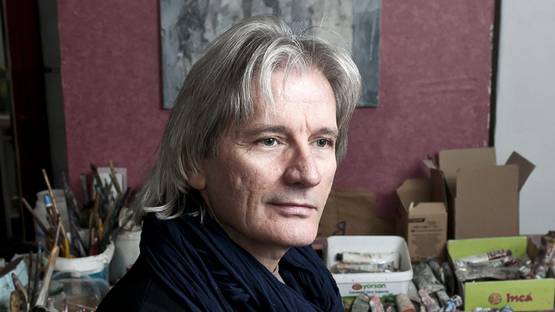 İrfan Önürmen is a contemporary Turkish artist who makes captivating portraits using simple shapes and soothing color palette. His work shows a great depth, almost three-dimensional, which compliments his theme: human relationships and personal experience. Önürmen places his subjects between universal and personal, giving them an authentic opportunity to voice out their expression. The distinction between intimate and public has been portrayed using contemporary methods, especially signifying the mass media effect. The focus is on an influence of digital and mass media on an authentic human experience, trapped between the differences of public and private.

The Magic of Collage

İrfan Önürmen was born in 1958 in Bursa, Turkey. He attended the Mimar Sinan Fine Arts University, where he graduated in Painting in 1987. He was still a student when he exhibited his first works in group showings in Istanbul. His first solo exhibition happened just a year after graduation, at the Sanfa Art Gallery, in 1988. He participated in many traveling shows and art festivals, across the Europe. He uses the variety of mediums to make the 3D looking paintings. He was trained to use formal painting technique, but his special interest was the collage. So, he started making collages on top of the painting, where he mixed tulle, lace and various types of fabrics.

Layering for the Depth

Gradually adding layers of paint, combined with a specific texture of textile he's painting on, gave his work a mesmerizing depth. Along with the fabric, he uses newspaper cutouts to make his pieces even more versatile. The choice of magazine images is not coincidental, he collected them over the period of time. In his private collection, he noticed that the paper images are making a concept of their own, so he decided to incorporate them into the artwork. This decision gave a conceptual depth to his pieces. He uses transparent and covering properties of tulle to give freedom to the painting, leaving the form open and unchanged. And the does the opposite with newspaper, manipulating the form with cutting, and intentionally leaving the changes visible.

The Selection of Information

The important feature of his art is the material and its manipulation. What Önürmen does to paper and textile, all the cutting, gluing and layering, represents a forceful changing of the subject. That happens to people, too. Sometimes the people are the ones who cut and subtract pieces of information and layer the different peculiarities to their mind. We take what is important to us, the information that can help us in any way. In the same manner, the artist takes out the material that can help him to realize his idea. This is one of the main reasons, İrfan Önürmen successfully portrays the influences of mass media on humanity, along with his painting skills and incredible talent.