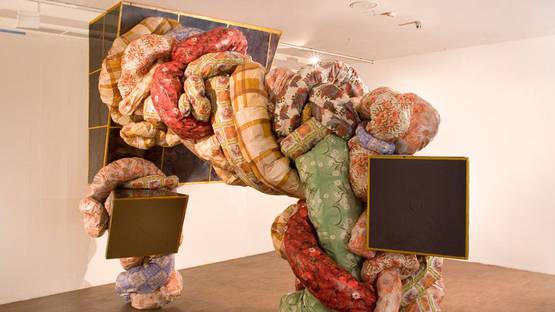 As one of the Russia’s leading young artist, Irina Korina has become world famous because of her unique and outstanding installations that play with viewers emotions and imagination. Naturally talented, she creates room-size pieces that combine sculptures and everyday objects with such ease, leaving the visual abstraction composed by certain identification. She constructs artworks that sometimes reflect mutually exclusive feelings like positive and depressive moods. The author is known for using waste, and disposable materials commonly found in Russia, and for applying camouflage and bricolage as artistic strategies, with which she tackles the nature as such. Her installations are directly connected with society and inspired by the news, media and cultural events. Alongside with the process of making site-specific and audio-visual pieces of art, which boldly transform galleries into immersive environments, she works as a theater and film designer.

The designer was born in 1977 in Moscow, where she graduated stage design in 2000 at the Russian Academy of Theatre Art (GITIS). The artist completed ‘New Artistic Strategies’ contemporary art course at the Moscow Institute for Contemporary art. She also studied art at the Valand Academy of Fine Arts in Gothenburg, Sweden, and at the Vienna Academy of Arts (Kunstakademie), Austria. Considered a master of the monumental and spatial format, the author uses juxtapositions such as global and local, physical and virtual, epic and colloquial, to explore human nature. Her works, although relatively new, already have the recognizable method and artistic style. Unlike Moscow conceptual artists whose concepts develop from specific forms to generalization, Irina uses a more subtle approach, with less narrative, creating striking impression based on the balance between reality and its interpretation.

Considered a master of the monumental and spatial format, the author uses juxtapositions such as global and local, physical and virtual, epic and colloquial, to explore human nature

Irina’s artworks include narratives that are intertwined with different textures, scale, and materials. Her pieces recall the interior look of ordinary Russian homes, as well as the transition of the Post-Soviet society. Artist’s sculptures have a touch of Marxism, in terms of the critique of capitalism as an economic system, and the process of redistribution of the excess. Installations signify ambiguity and confusion of the modern Russia, seen from the author’s perspective. The goal is to create uncertainty and doubt, leaving the audience in vacuum space, without any orienting points, nor support to feel safe. Author’s sometimes dramatic imagery confirms that there are attractive and fake appearances that oppose the truth, marking the mismatch between the expectations and reality. In her exhibition Destined to be Happy she uses black and white color filters, in regard to the influence of social medias such as Facebook and Instagram, which people use for twisting photos to look more beautiful, and making reality more real. The accent is on the communication through emojis, a new language based on hieroglyphs. The designer doesn’t refrain from using industrial surface materials like oilcloth, mosaics, PVC, ceiling tiles, wallpaper, or flower-print strips.

The goal is to create uncertainty and doubt, leaving the audience in vacuum space, without any orienting points, nor support to feel safe

Honors and Exhibitions around the World

For her amazing works, she was awarded Russia’s Soratnik Annual Award in 2006, 2009, and 2012. The project :)) from 2007 shows the complexity of the modern communication, by transforming household objects to look as smiling emoticons. In 2008 she won the Innovation State Prize for contemporary art. In the next year, she had the honor to present her installations in the Russian Pavilion at the Venice Biennale. Apart from this, her sculptures and installations were also displayed in solo shows like Topical Moscow at the Museum of Contemporary art, or Futurology at the esteemed Garage venue in 2010, curated by the French Herve Mikhailov. The artist’s pieces are regularly exhibited at the prestigious XL Gallery. Her art can also be seen in galleries and museums around the world, in cities such as Singapore, London, Vienna, Antwerp, and Paris.

She lives and creates in Moscow, Russia.

Featured image: Irina Korina - Nighttime Rate (detail), 2009, installation view, photo via prudentialeyeawards.com
All other images copyright of the artist and Gallery GRAD; All images used for illustrative purposes only