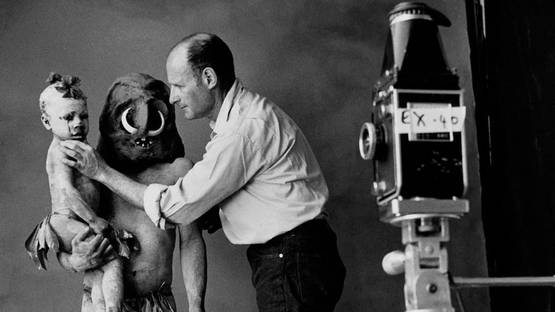 A renowned figure on both the commercial and fine art photography front, Irving Penn was an American artist whose long career marked a true milestone for the history of his chosen medium. His dramatic black and white imagery had a magical process of capturing portraits, still lifes and nudes in a way that the results would charm the viewers, mostly due to the enviable compositional balance. Furthermore, Penn was known for his technical precision that allowed him to get the absolute maximum out of his camera whatever the circumstances surrounding the shooting might be. Besides periodically photographing the streets, animal skulls and aging artists, Irving was primarily known for his fashion photography and images of celebrities and cultural icons. Whenever he was able to, Penn used natural light whilst he photographed his subjects[1], a feature that granted austerity, sophistication and tonal subtleties to his pictures.

Irving Penn was born on the 16th of June of the year 1917, in Plainfield, a part of the Union County, New Jersey, The United States. A new member of a Russian Jewish family, his parents' names were Harry Penn and Sonia Greenberg. Irving had a younger brother who was born in 1922, Arthur Penn - he would grow up and become a successful film director and producer. Arthur directed such cult icon movies as Little Big Man (1970) and Bonnie and Clyde (1967). Young Irving studied at the Philadelphia Museum School of Industrial Art (now known as the University of the Arts) between the years of 1934 and 1938. There, he attended classes concerning the techniques of drawing, painting, graphics and industrial arts. One of his professors was Alexey Brodovitch. It was this teacher that opened the doors for Irving to start working for Harper's Bazaar as the famed magazine accepted a few of Penn's drawings that were later published. The aspiring artist worked as a freelance designer for two years before he took the Brodovitch's position as the art director at Saks Fifth Avenue in the year of 1940. Finding such work uninspiring, Irving quit his job at Saks Fifth Avenue a year later and spent some time painting and taking photographs in Mexico and across the United States. When he finally returned to New York City, Penn was offered a position as an associate in the Vogue Art Department by Alexander Liberman. Initially, he was in charge of working on the layout of the magazine, but after a while, Liberman asked him to try photography.[2]

Accepting the newly offered role, Penn's first photographic cover for the Vogue appeared during the October of 1943, in a time that the globe was being swallowed up by the flames of World War II. Irving continued to work at this magazine throughout his career, regularly photographing covers, portraits, still lifes, fashion sessions and producing photographic essays[3]. He met the fashion model Lisa Fonssagrives at a photo shoot in 1947, almost instantly falling in love. A few years later, the two married at the Chelsea Register Office and soon had a son together. By that time, Penn was already very famous for his fashion photography and ethnographic pictures he took around the world. In the early portion of the 1950s, Penn established his own studio in New York City and began making advertising photographs for a chosen clientele. There, he was also able to work on his modernist approaches to composing photos, experimenting with still lifes of food, bones, bottles, metal and found objects. At the top of his game, there was not a single gallery or a journal that did not want to have at least a single portrait made by this photographer. Irving never stopped making photographic travel essays as this was obviously a big passion for the author[4]. He never ceased experimenting as well, always seeking new ways that may give his art some new depth, ability or meaning. Interestingly, Penn was among the first photographers to model subjects against a simple gray or white backdrop as he soon became a master at using this kind of simplicity. Many of his most notable subjects were photographed this way, including the likes of Martha Graham, Marcel Duchamp, Georgia O'Keeffe, W. H. Auden and Igor Stravinsky. The next decades of the artist's life were all dedicated to making photos, regardless of how old he was or how tired he felt. Penn died at the age of 92, on the 7th of October in 2009. He was at his beloved home in Manhattan.

Irving Penn - Truly One of the Greats

When Irving Penn's long career finally came to an end, everyone that remained behind were sure of one thing - that this American author can easily be considered to be one of the most influential photographers of the 20th century. And, in all honesty, it's quite hard to disclaim this case. When all was said and done, Penn photographed a multitude of important writers, visual artists and cultural figures that are all vital to our modern culture and history. Irving placed such figures in front of his camera as Jasper Johns, Pablo Picasso, Giorgio de Chirico, John Cage, Truman Capote and Louise Bourgeois. He was also in charge of producing images for Vogue, Chanel and other major fashion giants, all of which considered the American to be an elite employee, and managed to capture the very spirit of living in the 20th-century regardless of the geographical location[5]. Furthermore, Penn's technical supremacy and compositional style left a real tribute to today's practitioners that work had at investigating and staying true to Irving's black and white images.