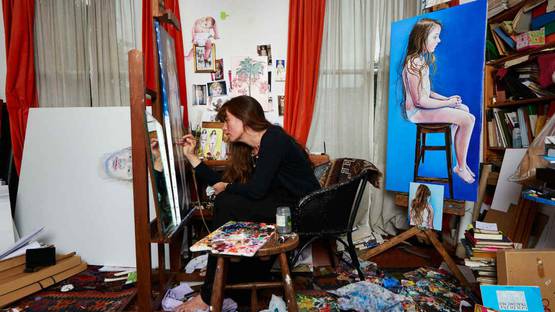 Taking the journey to the surface of the human being with every portrait she makes, Ishbel Myerscough records everything that she perceives with her keen eye. Interested in wrinkles, freckles, bulges, veins, tattoos, stretch marks, hair and every little imperfection that people have a tendency to hide and edit out of their body images, Myerscough paints her characters completely exposed and natural, revealing their character through their physical flaws.

Education and the First Recognition

Myerscough was born in London in 1968. She gained her education at Glasgow and the Slade Schools of Art. While finishing her studies, she won the National Portrait Gallery’s annual BP Portrait Award competition in 1995, which gave her enough of a reputation to create a contact with the London gallery and to be commissioned to paint Helen Mirren’s and Sir Willard White’s portraits for their collection. After spending some time at the USA painting in the artist program in Connecticut, she returned to England and finally settled in London.

Creative Expression as the Result of Long Friendship

During her studies in Glasgow, she has met painter Chantal Joffe that became her best friend, often painting each other. As the result of their long-standing friendship and cooperation, they organized the joint exhibition at the National Portrait Gallery. Painting themselves individually, together, with or without their children, their honest and brave portraits represent true refreshment in contemporary portraiture of photorealist works of perfect and beautified subjects. Using each other as models, the artists attempted to search out what it feels like to be the other one, and in turn, themselves. Also, as the mothers of the young children, they captured the special moments of the close relationship with their daughters.

Beauty Is Not on the Surface

Myerscough teaches at the Royal Drawing School once a week. Dedicating herself to her art, both creating and transferring experience and knowledge to her students, she is a very humble person, which is reflected in her paintings. The serious faces and honest look in the eyes of her characters reveal the bare subjects on the one side, and the artist on another, who finds the beauty in the deeper relationships instead of processed images of beautified reality.