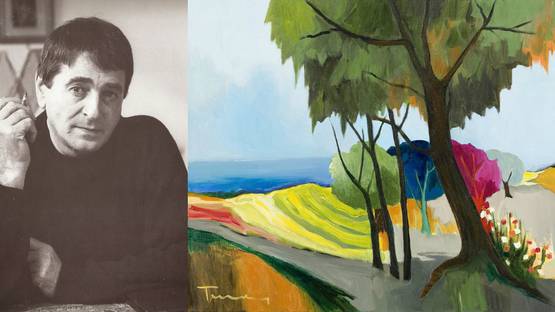 Itzchak Tarkay was born in 1935 in Subotica, Yugoslavia. At the age of 9, Tarkay and his family were sent to the Mathausen Concentration Camp by the Nazis until Allied liberation freed them a year later. In 1949 his family immigrated to Israel and was sent to the transit camp for new arrivals at Beer Yaakov. They lived in a kibbutz for several years, and in 1951 Tarkay received a scholarship to the Avni Art Academy where he studied under the artist Schwartzman and was mentored by other important Israeli artists of the time such as Mokady, Janko, Streichman and Stematsky.

Tarkay achieved recognition as a leading representative of a new generation of figurative artists. The inspiration for his work lies with French Impressionism and Post-Impressionism, particularly the color sophistication of Matisse and the drawing style of Toulouse-Lautrec. He drew upon the history of art to create many of his compositions, designing a kind of visual poetry from the aura of his cafes and intimate settings. As well as being an acrylic painter and watercolorist, Tarkay was a master graphic artist and his rich tapestry of form and color was achieved primarily through the use of the serigraph. In his serigraphs, many colors are laid over one another and used to create texture and transparency. When asked about his technique, Tarkay said it’s impossible to describe. “Can you explain your own handwriting?” he asked. He used his instinct to choose his colors and couldn’t define any other reason. “The color is coming,” he said. “When it’s finished, sometimes I’ll change the colors. It’s not something I think about.” Most of his choices were instinctive – inspired by his surroundings, the music he listened to, the places where he traveled and nature. Very often, Tarkay painted “en plein air” and brought his sketchbook outdoors. As it grew dark, he would take a series of photos and finish the work in his studio. Tarkay said that the most difficult part of his painting is realizing when a work is complete. He recalled going to a show once after he had not seen his paintings in about three months, having the urge to re-touch each piece. To him, the works were never done. In the later years of his life, Tarkay shared his gifts by mentoring younger Israeli artists including, David Najar, Yuval Wolfson and Mark Kanovich who often visited his studio, worked alongside him and received his critiques. Tarkay was also the only artist to collaborate with Israeli master, Yaacov Agam (1928). He and Agam created two paintings which incorporated both artists’ imagery in a single painting. Tarkay spent between five and six hours each day in the studio, six days a week. While he had very little free time, he enjoyed going to concerts, reading books and listening to music, and visiting friends. About working with Park West, Tarkay expressed how much he enjoyed meeting his collectors and his happiness to work with the other artists. He felt no sense of competition with them – only love – and was proud to have such a wonderful relationship with the artists, collectors, and gallery.

After exhibiting both in Israel and abroad, Tarkay received recognition at the International Artexpo in New York in 1986 and 1987 for works in several forms of media, including oil, acrylic and watercolor. Today, Tarkay is considered one of the most influential artists of the early 21st century and has inspired dozens of artists throughout the world with his contemplative depiction of the female figure. Three hardcover books have been written on Tarkay and his art, the most recent, Tarkay, Profile of an Artist, was published in 1997. Itzchak Tarkay died on June 3, 2012.