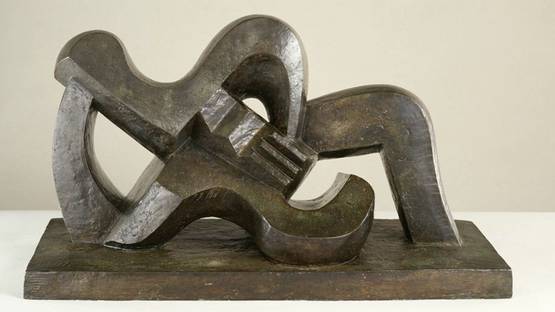 Jacques Lipchitz, born Chaim Jacob Lipchitz, was the Lithuanian-born French artist best known for the Cubist works he made in Paris during the early 1900s. At first, under the influence of his father, he studied engineering, but in 1909, supported by his mother he moved to Paris to study at the École des Beaux-Arts and the Académie Julian.

In Paris, Lipchitz became close friends with such neighbors as Pablo Picasso, Chaïm Soutine, and Amedeo Modigliani. He looked toward a wide array of non-European cultures for inspiration and was especially inspired by African art. In his sculpture, Lipchitz used clay and plaster to explore the formal language of Cubism. His work in geometric and abstract styles gained him a reputation as the major figure of Cubist sculpture. In 1912 Lipchitz exhibited at the Salon de la Société Nationale des Beaux-Arts and the Salon d'Automne with his first solo show held at Léonce Rosenberg's Galerie L’Effort Moderne in Paris in 1920.

In 1924 Lipchitz became a French citizen and married Berthe Kitrosser, whom he had known since 1915. At this time he experimented with abstract forms he called “transparent” sculptures. Later he developed a more dynamic style, which he applied with telling effect to bronze compositions of figures and animals. Two important pieces from that period are “La Joie de Vivre” and the powerful, 7 feet tall, totemic “Figure”.

After several prosperous decades in France, Lipchitz fled to New York in 1942 to escape the Nazi occupation. Arriving with only the few possessions he carried, the artist soon developed a robust new body of work and was hailed as one of the leading European expatriate artists.
He was one of 250 sculptors who exhibited in the Third Sculpture International Exhibition held at the Philadelphia Museum of Art in the summer of 1949. In 1954 a Lipchitz retrospective traveled from The Museum of Modern Art in New York to the Walker Art Center in Minneapolis and The Cleveland Museum of Art. In 1959, his series of small bronzes "To the Limit of the Possible" was shown at Fine Arts Associates in New York.

Throughout the 1960s and 1970s, Lipchitz' work was shown in the United States, Europe, and Israel. Beginning in 1963 he returned to Europe for several months of each year and worked in Pietrasanta, Italy. In 1972 his autobiography, co-authored with H. Harvard Arnason, was published on the occasion of an exhibition of his sculpture at The Metropolitan Museum of Art in New York.
Lipchitz continued his prolific and diverse output until the end of his life, including work on numerous commissions for public sculptures in the U.S. and abroad.