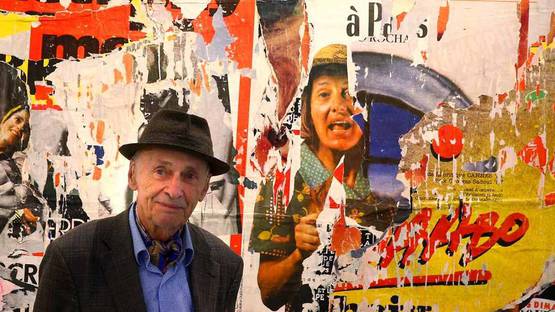 A man that has kept his eyes on the walls of Paris since 1949, constantly searching for interesting posters he can use, Jacques Villegle is a French mixed-media artist that is known for his mastery of the decollage technique. This method is an opposite to the concept of collage - instead of an illustration being built up from parts of different images, it is created by cutting, tearing away or otherwise removing pieces of images that have been stacked upon each other. He is also responsible for the development of a special kind of alphabet consisted of symbolic letters and is a successful affichiste (the French word for a poster artist or poster designer). All in all, Jacques Villegle is one of the most versatile and unique artists of the 20th century.

Jacques Villegle was born in the year of 1926, in the small town of Quimper, located in the northwestern France. He had a happy childhood up until the start of the World War II. Although he eventually ended up far from it, Villegle started his artistic explorations by studying architecture at the legendary Ecole des Beaux-Arts. After a few unpredictable turns of events, Jacques abandoned his studies in 1949 and decided to turn the next page of his life. He desired something new, unexplored, completely his - with these goals he began collecting found objects from the streets to construct pictorial tableaux, usually by mounting them on canvas. He gathered steel wires, fallen of posters, bricks from Saint-Malo's Atlantic retaining wall and, most importantly, posters that were scattered all over the streets of Paris. However, instead of simply making collages, he began doing damages to posters and by doing so established the decollage technique. During these years, Villegle worked alongside his friend Raymond Hains, another man that wanted to experiment with art. In June 1953, Jacques published Hepérile Éclaté, a phonetic poem by Camille Bryen, which was made unreadable until viewed through strips of grooved glass made by Hains. This is only one of the examples of how the duo experimented with artistic ideas. The journey of discovering new ways of expressing was not an easy one as it took a lot of time for the public to accept these designs. Villegle had to wait for nearly a decade before he was able to hold his first solo exhibition at the Colette Allendy Gallery. Three years later, in 1960, Jacques's work served as a cornerstone for the manifest of the Nouveau Realistes, a new moment in art history often compared to the Pop-art that will come to be in the decades that followed.

As was explained beforehand, Jacques Villegle developed his technique by gathering torn advertising posters and collaging them together, transforming them into striking compositions. He went by his famous saying: The whole world makes work for me. I only have to collect it. His depictions varied in type, covering everything from humor to eroticism, from light-headed satyrs to strong political criticism. Each of his works bears the name of the street where the poster was collected - that way Villegle was able to show homage to the previous purposes of his materials and to avoid unnecessary complications. He constructed and manipulated images by stacking posters over each other, having the top posters ripped and by doing so revealing to a greater or lesser degree the ones underneath. Since the December of 1949 when he began his decollage practices, his art evolved over time. In the start, his work was dark in color and he mostly focused on concepts close to typography - a typical example of such early pieces is the Arts Ménagers: Avril 1958, a cartoon sketch of a pair of eyes that stare out from the centre of the canvas, an area of paper suggests a jaw line and hints of letters are dotted about. Jacques Villegle was pushed towards further experimentation because too many critics were comparing his works to Cubist painting and so he altered his style in the following years, operating with brighter colors and more imagery as opposed to typography. Jacques also experimented with shapes at the time while his piece became increasingly sexual in nature. Like an urban archeologist of a sort, Villegle tirelessly categorized his works under various themes like painting, politics, events, transparency, etc.

...while his mature pieces show much more color and energy

One Of The Key Moments In Modern Art

Now a man in his nineties, Jacques Villegle's career with decollages and posters is over. It simply became too demanding physically for him to handle without issues. His last decollage piece was made on his 80th birthday celebration and it was a depiction of Jacques in many different colors. Since parting ways with posters, nowadays, Villegle concentrates mostly on his drawings and writing. Although retired from the world of decollages, this artist remains a true embodiment of a way modern artists of the 20th century used to think, develop ideas and concepts. Villegle personally invented a whole new way of manipulating images at a time when abstract paintings were the only thing worth mentioning in the art circles. And by doing so he helped write some of the most important pages of modern art history.

The artist is represented by Joël Knafo Art in Paris and Allouche Gallery in New York.