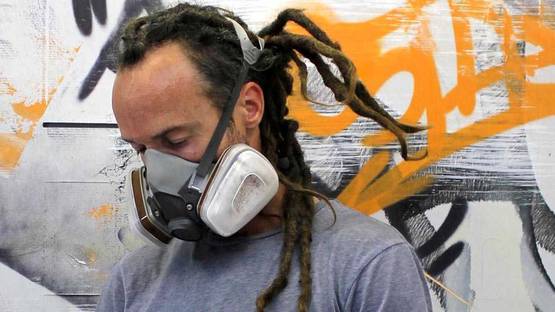 James Bullough is an American artist who grow up in the suburbs of Washington DC and now lives and works in Berlin.

As a child growing up in the suburbs of Washington DC, James was enamored with the edgy, “in your face” graffiti art that he saw through the windows of the DC subway.  As he began feeling the need to make art of his own, it was no surprise that this was the type of imagery that came naturally to him.  His obsessive graffiti sketches and graphic paintings eventually gave way to a new interest in realism and oil painting.  He began studying the techniques of the Dutch Masters and painting highly rendered oil paintings of contemporary imagery.

Since moving from the US in 2010 to Berlin Germany, Bullough finds himself reaching more and more for the spray can rather than the paintbrush.  His seamless transition from photorealistic oil paintings to photorealistic spray-paint murals has gained a lot of attention.  From 2011-2013 he worked under the name of JBAK with fellow American born/Berlin based artists Addison Karl.  Together the duo gained a lot of attention for their various projects and large-scale murals throughout Germany and America.
Currently, James works independently balancing his time between murals and studio work. His presentation of imagery although extremely realistic and detailed challenges the viewers perception of reality by shifting and breaking up the subjects he paints.
In 2014 Bullough introduced his newest project to the world.  As co-creator and host of VantagePoint Radio, a bi-weekly interview show focused on Urban Contemporary art and the artists who inhabit the genre, he sheds light on the life and process of artists in today’s contemporary art landscape.  (www.VantagePointBerlin.com)