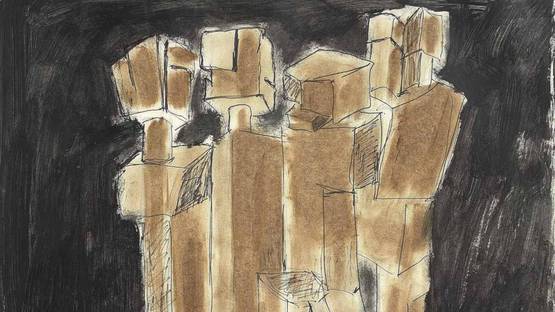 James Rosati was an American artist best known for his large-scale yet precisely crafted geometric sculptures. About forty of his monumental sculptures are located in the United States and around the world.

Born near Pittsburgh, Rosati moved to New York in 1944. There, he became a charter member of the Eighth Street Club and the New York School of Abstract Expressionists. He met and became friends with painters Willem de Kooning and Franz Kline and sculptor David Smith. Later, he taught at Pratt Institute, Cooper Union, Yale and Dartmouth.

Early during his career, Rosati experimented with rounded marble sculptures and busts, over time evolving to monumental works of strong Cubist influence, the style he is today best known for. Combining geometric forms of aluminum and steel, these sculptures were made up of elements that were rectilinear, with no two lines or planes that were parallel. The sense of movement in these non-symmetrical works was further enhanced by the changing angle of the sun. In 1969, Hilton Kramer of The New York Times described him as possessing "a very keen, elegant, intelligent sensibility, at once very poetic and very analytical." One of his best works Ideogram, commissioned in 1974 for the plaza between the former World Trade Center towers, was lost during 9/11.