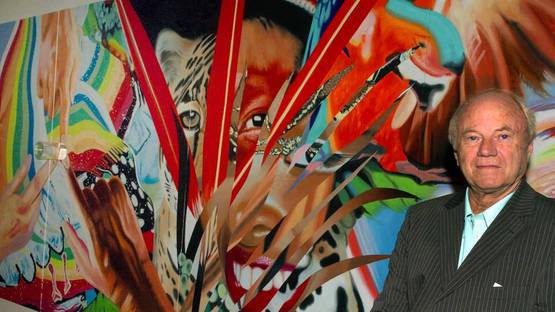 The mass-production and mass media certainly framed the work of James Rosenquist and made him as one of the most intriguing artists of the second half of 20th century. This pioneer of Pop art has constructed his authentic style by combining the skills learned from his initial art lessons with the ones absorbed from commercial jobs he did for some time. The superb concepts, immense craftsmanship and outstanding articulation of political and social issues made James Rosenquist one of the most prominent representatives of the genre.

James Rosenquist was born in Grand Forks, North Dakota. He grew up in a family of Swedish descent, and his parents were amateur pilots. At the age of 21, the artist moved to New York City in order to pursue on scholarship to study at the Art Students League. From 1957 to 1960, he earned money for his living as a billboard painter. Rosenquist quickly applied sign-painting techniques to the large-scale paintings he began creating in 1960. Like other pop artists, Rosenquist adapted the visual language of advertising and pop culture (often funny, vulgar, and outrageous) to the context of fine art.

One the best-known ambassadors of American art

In order to create strong narratives, Rosenquist collaged and juxtaposed fragmentary images borrowed largely from advertisements and mass media in Surrealist fashion. The overall effect was often abstract and provocative since a majority of depicted everyday objects were combined in an odd manner. The specific process of enlarging the objects and creating rather complex relations between them was an actually base of the artist’s critical agenda of American consumerist society during the 60’s. The pioneering technique and appropriation of such popular references quickly made him one of the key figures in the development of Pop, but such a devotion and critical activity lasted basically till the end of his career.

John F. Kennedy as a symbol of affluent, yet troubled America

In 1960 was the artist began renting a small studio in lower Manhattan popular among emerging artists at the time and his neighbors included Robert Indiana, Agnes Martin, and Ellsworth Kelly. Working in this new studio space, Rosenquist began to reconsider his approach to painting due to exhaustion of the Abstract Expressionist style. In 1962, Rosenquist had his first solo exhibition at the Green Gallery in New York which was quite of success. Very soon, Collectors and influential gallery owners like Richard Bellamy and Leo Castelli began to show interest in Rosenquist's new paintings.

Vivid palette is one of the Rosenquest's main features

In 1965, James Rosenquist's exhibited at the Leo Castelli Gallery his huge mural painting F-111. The piece was originally created to cover all walls of the Leo Castelli gallery in New York, and included separate compositions of a mushroom cloud under a beach umbrella, some spaghetti, a piece of cake, a Firestone tire, a swimmer, light bulbs, and a little girl under a hairdryer, all set against the backdrop of an F-111 fighter jet. The constellation drew much of attention in regards to the intense relationship between military might and consumer economics.

The interest in unconventional materials and site-specific installations

The Mature Period And Complete Recognition

In the 1970s, the artist began work on two murals for the State of Florida, but in 1971 the artist’s wife and son sustained serious injuries in an automobile accident, which left Rosenquist emotionally and psychologically scarred and affected his work for the next five to six years. During the following year, major retrospectives of his work were organized at the Wallraf-Richartz Museum and the other at the Whitney Museum of American Art. Rosenquist rented a studio in Ybor City, Florida in 1974, whose climate and scenery has greatly influenced his style. During this time, James Rosenquist also became politically involved and pledge the government for better legislation to protect artists' rights and protesting the Vietnam War.

Throughout the ’80s the artist continued to paint large-scale works

The Late Work of James Rosenquist

Paintings created during the seventh decade reflect the increment of political concerns, as well as his fascination with technology, modern innovations, and their sometimes conflicting relationship with nature, so by 1980, ecological issues started overwhelming Rosenquist. His fame continued to grow and in 1987 he was admitted to the American Academy and Institute of Art and Letters in New York. Throughout the 90’s the artist mostly released large scale print, and One of them Time Dust is thought to be the largest print in the world.

In the early 1990s, James Rosenquist was the subject of major retrospective exhibitions

The unstoppable and continues the activity of Pop art legend in the 00’s even brought him the reputation as one of the few pop artists who’s work is still relevant. That is related with the fact that Rosenquist moved beyond his early fascination with popular culture and mass media to articulating new issues such as the intersection of science and aesthetics. In 2003 the Solomon R. Guggenheim Museum staged a full-career traveling retrospective. Sadly, in 2009, a fire swept through and burned the artist's house, studios, and warehouse; all of his paintings stored on his property were destroyed, including art for an upcoming show.

The number of solo and group exhibitions over the years has become really big, as well as the number of works in the public and private collection. Rosenquist himself was the subject of a number of documentary films and was featured in two public television series, The Shock of the New and The Empire of the Signs: American Visions. The photographic use of advertisement imagery or ad-inspired painting can be noticed in the works of various later artist like Jeff Koons. Nevertheless, the artist’s innovation, progressive methods at the times, politically and socially charged concepts were always in accordance with contemporary moment meaning that during his lifetime James Rosenquist saw the work of art as an active element of human activity.