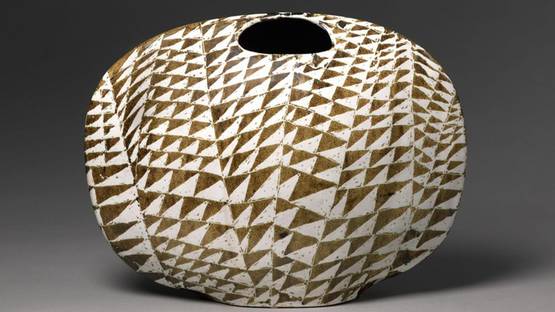 James Tower, born in Kent in 1919, was a British ceramicist, painter and sculptor. He studied painting at the Royal Academy (1938-1940), where he won the Gold Medal for Painting in 1939. During the Second World War he was enrolled in service, but returned to art in 1946, enrolling at the Slade School of Art. Here he was introduced to early English slipware and subsequently, became fascinated with ceramics. He was invited to set up a ceramics course at Bath Academy of Art, Corsham. It provided the ideal environment for Tower to develop his unique style, distinct from the teachings of Bernard Leach and traditional pottery. The organic forms and painterly surfaces of his flattened bottles and disc like vases, evoke notions of nature, referencing foliage, water and the landscape. Tower often destroyed many works that did not satisfy him and as a result his oeuvre is relatively small.