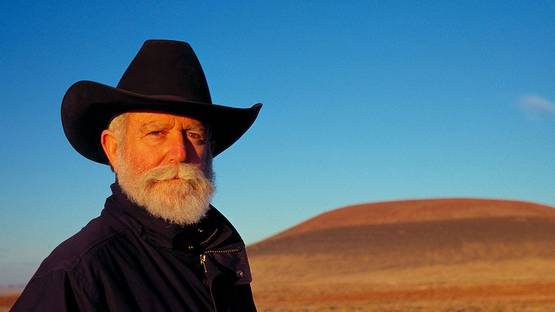 By manipulating light rather than paint or sculptural material, James Turrell made a radical move, introducing art that was not an object but an experience in perception. The very nature of seeing was in question. During the last half a century, the artist has become worldwide known not only for his light projections and installations but especially for his continued work for more than three decades on his Roden Crater project. Whether he's projecting shapes on a flat wall or into the corner of a gallery space, James Turrell is perpetually asking the viewers to ‘go inside and greet the light’. Through these interventions, he rekindles the location’s identity, turning it into a temple of spirit that encourages a state of meditative contemplation.

Born in Los Angeles, Turrell was brought up in Pasadena in a devout Quaker family. His father, Archibald Milton Turrell, was an aeronautical engineer and educator, and his mother trained as a medical doctor and later worked in the Peace Corps. He admitted that it wasn’t always easy to exist as an artistic spirit in those circumstances: “I come from a family that does not believe in art to this day. They think art is vanity.”[1] However, there were some family members that had a different lifestyle, believing into something else. Frances Hodges, one of his aunts, lived in Manhattan and worked for a fashion magazine. When he visited, she would take him to all sorts of cultural events, from museums to concerts, expanding along the way his virtues of engagement with modern life. On one of these trips with his aunt, Turrell visited the Museum of Modern Art, where he discovered the work of Thomas Wilfred, who experimented with projected light back in the early 1900s. In 1961, he graduated from Pasadena High School and enrolled at Pomona College to study math and perceptual psychology. Four years later, he received a BA in Psychology. His interests seemed to emphasize the science, but he never actually stopped indulging his interest in art. After graduation, he enrolled in a graduate art program at the University of California, Irvine, but only spent a year there. In 1966, he was arrested for coaching young men to avoid the Vietnam draft. He spent about a year in jail, and after his release in 1967, moved into a shuttered hotel in the Ocean Park section of Santa Monica. He finalized his artistic education by earning an MA in Art from Claremont Graduate School in 1973.

The Art of James Turrell

At first, one would find that categorizing Turrell’s work might not be. At least not as easy as for other artists who have reached that level of international fame and critical acclaim. Often, it’s been spoken about as making light palpable. Turrell doesn’t disagree, but explains his approach: “It’s about perception. For me, it’s using light as a material to influence or affect the medium of perception. I feel that I want to use light as this wonderful and magic elixir that we drink as Vitamin D through the skin—and I mean, we are literally light-eaters—to then affect the way that we see. We live within this reality we create, and we’re quite unaware of how we create the reality. So the work is often a general koan into how we go about forming this world in which we live, in particular with seeing.”[2] Although he was interested in art, his first interest was the light. This interest and fascination with light became fused with the psychology of perception. Further, by adding math - Riemannian geometry, to be precise - (another field Turrell has an interest in), he was able to take things to the next level. “You have to talk about light, and not just light reflected off the surface, which has to do with painting. Rather than making something about light, I wanted something that was light, and that’s the biggest difference.”[3] The artist brought a revolution by distancing the understanding of art as making an object, introducing instead a new meaning – a complete experience in perception. But, not all could find themselves in this kind of work. There were some injuries at shows, and some lawsuits filed. They complained that Turrell’s work made them disoriented and confused. However, it comes as no surprise that not all can enjoy his work. Usually, when coming to an exhibition, the viewer knows where things are and what is real. With Turrell, that comfort becomes stripped away, as his work requires a certain level of surrender – something not all are prepared to do.

As one of the pioneers of the Light and Space movement in the 60s, James Turrell chose the light as his medium, and it has since become a language a number of people can speak rather fluently. Among those gifted artists, several stand out. Robert Irwin (perhaps best known for the Getty Gardens in Los Angeles, an ever-changing, site-specific installation that explores the interplay between light, flora, and water) is an innovator in the Light and Space movement, who began his career as a painter and turned to installation as a means of disposing with medium and object altogether. In 1984, Turrell and Irwin became the first visual artists to receive MacArthur “genius” grants. Olafur Eliasson is another multi-talented artist. He uses natural elements (like light, water, fog) and makeshift technical devices to transform museum galleries and public areas into immersive environments. Dan Flavin, a seminal Light artist, originally struggled for years to find the appropriate medium for his artistic expression. Finally liberated by fluorescent light, he made a radical gesture of using the commonplace commercial fixtures, reconfiguring them into artworks – a feat comparable with Duchamp’s readymades. Ron Cooper works with variously colored fluorescent lights, as well as materials like glass panels, resin, and fiberglass that hold, refract and reflect light. For example, in Floating Volume of Light (1972), Cooper directs two beams of light to cross each other in mid-air, forming a cubic sculpture of light that hovers in space. Eric Cahan is a photographer whose primary themes are skies and oceans. His compositions are far from traditional landscapes – it’s understandable upon a realization that his true subject is the quality and appearance of light at sunrise and sunset. Cahan was actually inspired to begin these works (they share the name Sky Series) after seeing James Turrell’s earthworks at Roden Crater.

A piece in Projection Series is created by projecting a single, controlled beam of light from the opposing corner of the room. Shallow Space Constructions are viewed from the rear of a large room in which controlled lighting challenges the viewer’s depth perception. A work from Corner Shallow Space is created in a convex corner; the light creates an illusion of a three-dimensional object. In Wedgeworks, the artist uses the projected light, creating an illusion of walls or barriers. A Veil combines the use of natural and artificial light to create a slowly changing curtain, or veil, of light. A Dark Space is an enclosed room with no seemingly perceivable light. The concept of a Dark Space is not about what one is supposed to see but the experience of what the artist describes as “seeing yourself see.” The Space Division (also called an ‘Aperture’ work) consists of a large, horizontal aperture which appears to be a flat painting or a LED screen but is a light-emitting opening to a seemingly infinite, light filled room beyond. In Ganzfeld, Turrell creates a similar experience of “Ganzfeld”: a German word to describe the phenomenon of the total loss of depth perception as in the experience of a white-out. A Skyspace is a specifically proportioned chamber with an aperture in the ceiling open to the sky. Skyspaces can be autonomous structures or integrated into existing architecture. The aperture can be round, ovular or square. Turrell’s Perceptual Cells Series are enclosed, autonomous spaces built specifically for one person at a time, in which one’s perception of space is challenged by light. A Tall Glass or Wide Glass piece is an aperture within which LEDs are programmed to change slowly over the course of several hours. With an understanding that a hologram is a recording of light waves on a thin layer of transparent gelatin emulsion - in the emulsion is an image that has full parallax. In other words, it appears to have depth from every vantage point. Unlike traditional holograms that depict objects, the Turrell holograms aim to make a hologram of light itself.

The Roden Crater is, without a doubt, Turrell’s most important and ambitious project. Located in the Painted Desert region of Northern Arizona, is an unprecedented large-scale artwork created within a volcanic cinder cone. It represents the culmination of the artist’s lifelong research in the field of human visual and psychological perception, and is a controlled environment for the experiencing and contemplation of light. Being a magnum opus of James Turrell’s career, the piece is designed to be a gateway to the contemplation of light, time and landscape. It functions as a naked eye observatory of earthly and celestial events that are both predictable and continually in flux. Constructed to last for centuries to come, Roden Crater links the physical and the ephemeral, the objective with the subjective, in a transformative sensory experience. Since acquiring the dormant cinder cone in 1977, the artist has ’shaped’ Roden Crater into a site containing tunnels and apertures that open onto pristine skies, capturing light directly from the sun in daylight hours, and the planets and stars at night. The first major phase of construction included the movement of over 1.3 million cubic yards of earth to shape the Crater Bowl and the construction of the 854′ East Tunnel. Six spaces were completed, including two of the most difficult, the shaping of the Crater Bowl and the Alpha (East) Tunnel. The Sun | Moon Chamber, East Portal, and the Crater’s Eye, are joined by the Alpha (East) Tunnel and a connecting tunnel to the Crater Bowl.[4] However, even after almost four decades of work, the projects isn’t completed, and as such, it’s still closed to general public. Only those with special invitations from the artist are lucky enough to experience this masterpiece and fully realize what the art of James Turrell is about.

James Turrell is one of the pioneers of Light Art. He has influenced and inspired countless other artists, not just those who share the same medium. In the end, completely understanding the significance of his entire oeuvre and not meaning to leave anything out, we have to say that Turrell’s greatest legacy is the Roden Crater, his life work. It’s somewhat paradoxical that an artist, who focused on the very essence of light during his career, could leave something as material as his greatest creation. And yet, grand as it is (speaking on a material level), the people often mistake its monumentality. Even though its largeness comes from the existing landscape, the existing physical, environmental landscape, the real power is in its ability to provide an intimate experience to all who are able to see it.

He is represented by Gagosian Gallery, Pace Gallery, and Vogelartedition.