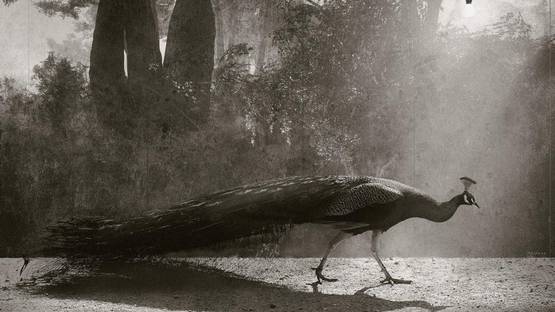 Fascinated by nature, Jan Gulfoss is a Dutch explorer, both in terms of arts and science. From an early age, he has continuously observed his environment and attempted to render its images and sounds. He was particularly interested in birds, expressing it through painting and recordings of the spectrum of sound reflected in their song. At the age of sixteen, he moved to the South of France, where he studied Law and Art in Nice. The mid-1970s mark the beginning of a long period of artistic and scientific research and explorations. Around the same time, Gulfoss began to explore new evolving technologies, trying to integrate these into his creative work. Working with 3D applications and a range of sound frequencies, he started creating photographic compositions of animals and various other objects, staged in theatrical settings.

A frequent visitor of nature museums, Gulfoss also roams the world in a constant scientific expedition, from the Icelandic glaciers and volcanoes to the hanging monasteries of Bhutan, via the Arctic pole, Tasmania, the Amazon, or Africa. On these trips, he studies the frequencies of Nature and records whale songs, Buddhist monks’ chants, or aboriginal didgeridoo. In 2007, his studio in St. Rémy de Provence burned down completely, and all of his body of creative work and research was lost. The life-changing event ignited a creative spark, leading him on an epic voyage of discovery, inspired by the great explorers of earlier centuries. Revisiting the classic studio portrait, Gulfoss places his model in front of a painted background. The staged photograph appears to show the subject in its natural habitat, revealing the subterfuge only upon closer inspection - a door, a light bulb, a glare on a window, unveil to our subconsciousness the frailty of what we had hoped to see.