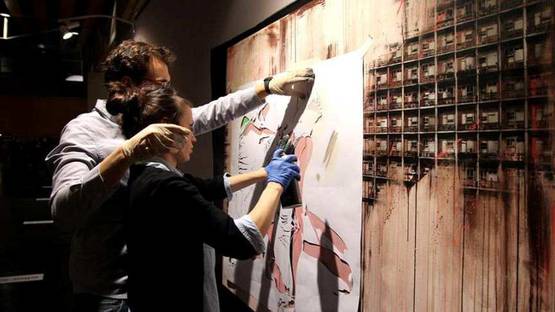 Jana & JS are an Austro-French artist couple, whose work can be found both in urban as well as in a closed space. Jana & Js merge their work since 2007 around their passion for photography and their common sensitivity to the urban aesthetic. They met in Madrid, have developed their work in Paris and lived in Austria since 2010.

Inspired by the city and its architecture in the change of time, as well as the residents and their viewers, they spray urban landscapes, portraits and details of architectures (often photographed people) with a play of reflections and transparencies. They use the stencil technique (after artiste-Ouvrier, together collectively in WCA), where they work exclusively with their own photos. It is their practice of the photo that leads them to choose the stencil technique, ideal for making works of extreme minutiae from their own photographs on canvas and paper, but mainly on wood and recycled materials.

In 2012 Jana & Js started painting people who are enclosed in circles. When spending time in the forest with their little son, the tree trunks reminded them of their work and they decided to apply their characters to the wood. According to Jana & Js, it was very exciting exploring new support and seeing their  work in a completely new ambiance. It gave a totally new dimension to their  work. They have taken to the natural world for a series of suburban artworks painted directly onto the surface of trees. Set within a forest landscape, the creative duo find their canvasses inside circles formed from the cross-section slice of a halved or cut tree branch. The figures illustrated inside respond to their confines, lounging in the arc of rounded tree ring and even crunched within the rim of the ridged bark. Drawn in a stencil style, the portraits are of modern people, dressed in contemporary clothing — a juxtaposition to the organic scenery that surrounds them.

They state: “For us painting outside doesn’t mean finding the most visible spot but it is more about finding the perfect placement for a particular image. Usually our paintings are inspired by the city and integrated in urban environments. It was very exciting exploring this new support and seeing our work in a completely new ambience.”

They also carry the sculpture since 2010 and draw their own screenprints, particularly in the workshop of the father of Jana near Salzburg. Equally at home in a gallery than in urban areas, the Austro-French duo painted regularly the world's cities from Vienna to Moscow via Salzburg, Shanghai and London.