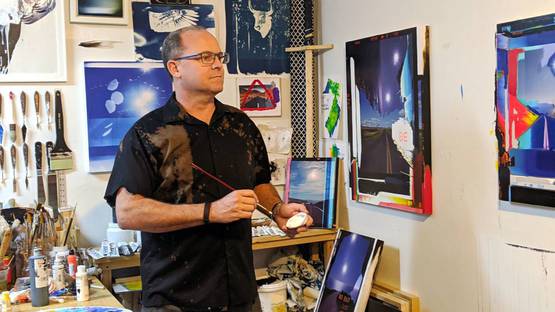 San Francisco-based artist Jason Engelund merges aspects of painting and photography in ways that expand the definition of both mediums. His compositions are grounded in the realm of landscape, where foreground and background elements lead the eye inwards towards a rational picture space. Engelund upends that sensible grasp of visual reality, which we have come to expect from a landscape photograph, dissolving into an abstracted dreamscape in which the mind is tantalized by psychedelic color fields, burned out light blots, flashes of text, and visceral encounters with paint. Positioned somewhere between memory and metaphor, the work invites viewers to question pre-supposed limitations of the photographic image.

Engelund earned his Bachelor of Fine Arts with Distinction at the California College of Arts and Crafts and his Master of Fine Arts from the University of California, Davis. In addition to numerous private collections, work by Engelund is in the permanent collection of the Museum of Photographic Arts of San Diego.