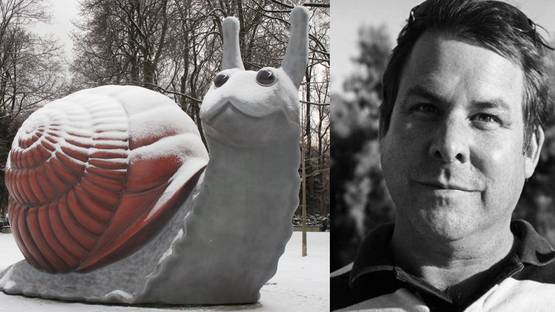 Jason Rhoades was an American artist born on July 9, 1965 in Newcastle, California, and died on August 1, 2006. He was an installation artist who had widespread public recognition and enjoyed critical acclaim. By some critics he was eulogized as one of the most significant artists of his generation. Rhoades attended California College of Arts and Crafts, Oakland CA, in 1985, after which he enrolled San Francisco Art Institute, in 1986, where he got his BFA, in 1988. His MFA he got at University of California, Los Angeles, where he studied from 1991 to 1993. During his studies in San Francisco he also founded a movement called Funk o' Metric, also known as FOM or FOAM. The members of this group included Peter Warren, Bill Becchio, Laurie Steelink, Sebastian Clough, and Marshall Weber, among others. After finishing his studies 1993, he joined David Zwirner, becoming part of the gallery's original roster of artists, and had his first New York solo show. For the last twelve years of his life, Rhoades was exhibiting regularly, and was better known in Europe than U.S. His dinner party/exhibition combinations in which he has exhibited violet neon signs with African, Caribbean, Creole and hip-hop slang for the female genitalia celebrated him in the last years of his life. Up to his untimely death at the age of 41, Rhoades carried out a continuous assault on aesthetic conventions and the rules governing the art world. Believing that the creative process demanded ultimate freedom, his work could be dangerous, overwhelming, politically incorrect, obnoxious, or sublime. On August 1, 2006 Rhoades was taken from his home to Cedars-Sinai Medical Center, where he was pronounced dead. The cause of death was heart failure, caused by accidental drug intoxication and heart disease.

Rhoades works were exhibited internationally since 1990s. In Europe he had his first solo exhibition at Kunsthalle Basel in 1996. After, he was exhibited all around the Europe, in the Van Abbemuseum, Eindhoven, The Netherlands, in 1998, Kunsthalle Nürnberg, Nuremberg, Germany, also in 1998, Deichtorhallen Hamburg, Germany, in 1999, Museum Haus Esters, Krefeld, Germany in 2000, Museum Moderner Kunst Stiftung Ludwig Wien (MUMOK), Vienna in 2002, Le Magasin - Centre National d'Art Contemporain de Grenoble, France in 2005 and the Centro de Arte Contemporáneo de Málaga, Spain in 2006. After his death in November 2006, a re-creation of Black Pussy Soirée Cabaret Macramé, was shown in New York City featuring recordings and photographs made at the original event from the artist's Los Angeles studio in early 2006. In the center was artists (empty) white suit in which he photographed himself shortly before his death. His work is still featured in exhibitions worldwide. In 2013, his work was part of NYC 1993: Experimental Jet Set, Trash and No Star at the New Museum in New York. Also in 2013, exhibition titled Jason Rhoades, Four Roads was organized by Institute of Contemporary Art in Philadelphia. In 2014, David Zwirner presented Jason Rhoades: PeaRoeFoam at the gallery in New York. Other group shows which he was a part of  include the Whitney Biennial (1995, 1997, and 2008) and the Venice Biennale (1997, 1999, and 2007). His work is featured at various museum collections such as the Centre Georges Pompidou, Paris, Hamburger Bahnhof - Museum für Gegenwart, Berlin, Los Angeles County Museum of Art, Museum of Contemporary Art, Los Angeles, The Museum of Modern Art, New York, San Francisco Museum of Modern Art, Solomon R. Guggenheim Museum, New York, Stedelijk Museum, Amsterdam, Tate Gallery, London, and the Whitney Museum of American Art, New York. His works remained the part of the permanent collection in the Rubell Family Collection in Miami, where he was a part of the exhibition titled Beg Borrow and Steal at the time of his death.

Rhoades was married to Australian-born artist Rachel Khedoor and with her had a daughter named Rubi.