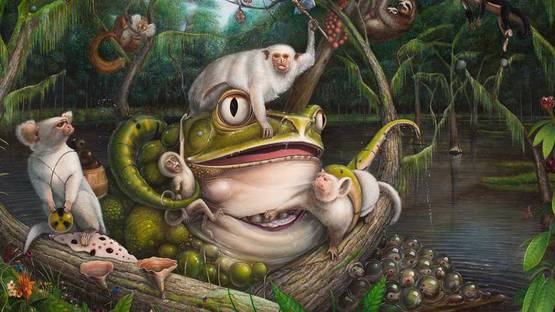 Jean-Pierre Arboleda was born in Quito, Ecuador. He grew up with a deep love of animals and nature and loved to draw and paint throughout his childhood. He moved as a young adult to New York City and received his BFA in illustration at the School of Visual Arts and his Master's degree in fine art at the New York Academy. His obsession with animals and nature grew to encompass topics that concerned issues of evolutionary change, environmental toxicity, and war. The very humanoid qualities Jean-Pierre gives to his animals challenges the viewer to see the world from animal’s standpoint: in a world without humans, where animals have dominated humans and sport human trinkets and shrunken heads. His subjects mutate and morph, struggle with destruction and chaos, and wrestle with societal issues and re-contextualize them with animals in a critique of humanity and compassion.

Featured image: Jean-Pierre Arboleda - The Abominable One (detail), 2016 - image courtesy of the artist