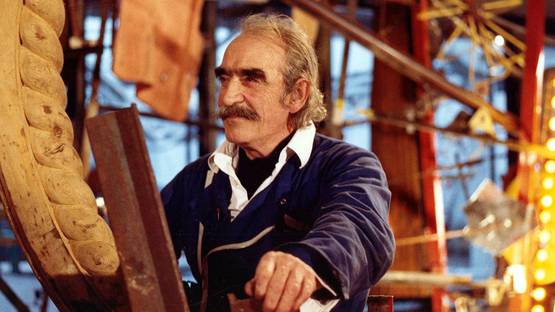 One of the most important artist in the development of Kinetic art as well as Nouveau réalisme, Jean Tinguely was a Swiss sculptor widely recognized for his thought-provoking and playful pieces that he liked to call metamechanics. Using ordinary everyday objects, rusty iron, and waste material, he created a wide range of intriguing artworks that make barbed satirical points both about the technological development and modern society. The leitmotif of his works is a movement that can be actively experienced both acoustically or visually.

Born in 1925, in Fribourg, a city in Switzerland, Jean Tinguely grew up in Basel where he carried out an apprenticeship as a shop-window decorator in a department store during his teens. Aged fifteen, he enrolled in evening classes at the Art School (Kunstschule) where he studied under the tutelage of Julia Ris, who introduced Tinguely to the Dadaist collages of Kurt Schwitters, a German artist most commonly associated with the Dada movement. Schwitters’ Dadaist collages made of discarded ticket stubs, pieces of old newspapers and magazines, buttons, gears, and other objects assembled into compositions made a deep impression on Tinguely’s constructions. After World War II, he began painting in a Surrealist manner, but he soon abandoned painting to concentrate on sculpture made of junk.

Dada movement made a deep impression on Tinguely’s work

Tinguely and his first wife, Swiss painter and sculptor Eva Aeppli, relocated to France in the early 1950s, where he became involved with the Parisian avant-garde movement, meeting artists such as Yves Klein, Arman, and Daniel Spoerri. They were part of the Nouveaux Réalisme (New Realism) which can be seen as a European counterpart to pop art. Subsequently, Tinguely began creating his most famous works - sculptural machines, known as metamechanics, which incorporated a vast array of materials, including wood, metal, fabric, gears, musical instruments, and found objects into moving or static constructions. Highly skeptical about the potential of technology to improve human life, he used his pieces made of industrial machinery to express an anarchic, satirical attitude to machines and industrial development. Some of his pieces were designed to self-destruct and others were made in a way that predetermined a malfunction, culminating in an unpredictable finale.

Tinguely created his sculptures from a vast array of materials

Tinguely was one of the pioneers in the field of art that engenders social engagement. In the late 1950s, he designed a series of automatic drawing machines, the Meta-Matics, which use chalk or markers to make abstract drawings through a mechanized process. These were portable machines with drawing arms that allowed the spectator to produce abstract works only by pushing the button. The “painting machines” were exhibited at the Biennale de Paris in 1959, resulting in almost 40,000 paintings produced by visitors in two weeks. However, not all of the Meta-matics functioned properly, and Tinguely destroyed some of them. He then began to incorporate electric motors into his works, taking as his models Marcel Duchamp’s Roto Reliefs.

Jean Tinguely is perhaps best known for his 23-foot high and 27-foot long conceptual piece Homage to New York that was supposed to destroy itself in the garden of The Museum of Modern Art. On March 17th, 1960, several hundred of invited people attended the event which was unsuccessful as the complex assemblage of motors and wheels failed to operate properly and only partially completed its task—its flames were put out by the fire department. The machine paid homage to NYC’s ability to constantly renew itself. Tinguely’s next two self-destroying pieces entitled Study for an End of the World detonated more successfully.

In 1955, Tinguely met French sculptor, painter, and filmmaker Niki de Saint Phalle whom he befriended before they decide to live together in the early 1960s. During the 1970s, he had embarked on a series of fountain projects, and, in collaboration with Niki, who became his wife in the meantime, created the notorious Stravinsky Fountain (La Fontaine Stravinsky, 1983) - a whimsical public fountain ornamented with sixteen works of sculpture, moving and spraying water, representing the works of the famous Russian composer, pianist, and conductor Igor Stravinsky. Located between the Centre Pompidou and the Church of Saint-Merri, it is one of the most photographed Parisian fountains.

Stravinsky Fountain is one of the most photographed Parisian fountains

Master of Art in Movement

The artist, who died on August 30, 1991, in Bern, was one of the icons of kinetic art widely recognized for his witty, humorous, and ironic moving sculptures of waste material that work as machines but don’t have any useful purpose. Since his first one-man show in Switzerland in 1962, his work has been included in numerous important exhibition throughout Europe, the United States and beyond. In 1996, the Museum Tinguely opened in Basel. His unpredictable mechanized sculpture-machines that often included music recordings and performances left an indelible trace on the 20th-century art.