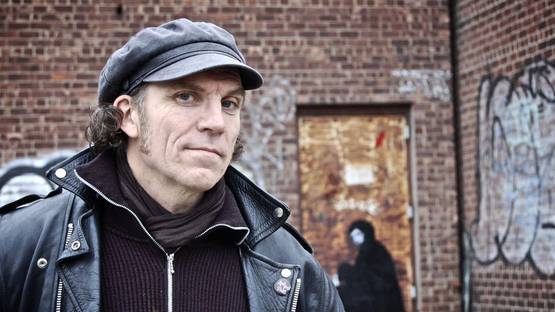 From pioneering street art to achieving a status of the legend, Jean-François Perroy, better known as Jef Aérosol, is without a doubt one of the most famous artists in the contemporary world. Slowly honing the skills and building up his reputation, this master of stencil inspired generations of youngsters who ventured into the wilderness of the city jungles, following the footsteps of their hero, hoping to leave their own mark, just as Aérosol did. Many cities around the globe have been blessed with his pieces, and countless portraits of both famous people and the ordinary ones, immortalized by the artist, now greet anyone that walks by. Black, white, and gray dominate his art, usually accompanied by the red arrow, the artist’s trademark, and a powerful graphic element on its own.

A Biography of the True Street Artist

The sevens marked his early life. He was born in 1957, along with the rock. The hippie movement formed a decade later. In 1977, the punk wave was strong and engulfing. These three dates describe an effervescent era, marked by the pop revolution in the musical sense, as well as in artistic. Aérosol grew up in Nantes, surrounded by the labor culture of his parents. Constantly seeking to escape the seriousness of the adult world and to somehow bridge the enormous generation gap, he sought everything that came from places like New York or London, embracing the incredible dream which accompanied the phenomenon such as Beatles. His artistic career began through copy-art, which stands for using photocopiers to create artworks. It was the ‘thing’ in the late 70’s, and the fact that he was using a tool whose purpose wasn’t for creating art made it even more interesting. The artist thinks the copy-art didn’t have a particularly strong influence on his stencil, as they are completely different techniques, except for the speedy aspect.

Aérosol emphasizes the significance of the night when he created his first stencil – it was 1982, in Tours, and the moment he painted over the prepared pattern was the moment he got hooked. Naturally, the feeling has changed and evolved over years, but he still feels excited every time he works on a piece. At the time, the stencil was new, and was directly connected to his young age, but also to the period of the early 80’s and those are essentially the reasons he was so attracted to it. But even with the passing of time and change in sensations, ideas, context, feelings, Aérosol still finds working in the streets enjoyable and fulfilling.

Unaware of their work when he began his own, Aérosol eventually saw the pieces made by Blek le Rat and Speedy Graphito and was partially inspired by them. Especially le Rat’s choice of black and white and the size of his pieces. Today, the three of them are thought of as pioneers of stencil art, and one would expect that there is some sort of associated pressure or expectations. Aérosol denies the presence of pressure, but also declines any special status followed by the titles. As he states, the fame and hierarchy do not interest him. There is no other choice as long as he follows his own road and feels deep within himself that he still has to do what he does. This kind of thinking and acting turned Aérosol into an icon, who is now himself an inspiration to other urban artists, like the omnipresent Banksy or another French street art legend, C215.

The artist's new works evoke feelings similar to his early ones

The Anonymous and Celebrities

Aérosol’s most notable feature is certainly his portraits. It comes as no big surprise since he’s always been interested in them and in the representation of man generally. The idea of showing that each and every one of us is just a face in the crowd has prevailed throughout his career. Depicting his life-size figures, dominantly black and white (there are exceptions of course) as a freeze frame of the film of life, the artist is able to perfectly capture the single moment in the never-ending flow of the city crowd. The choice of color emphasizes the reference to cinema and equally affirms the desire not to fall into a trompe-l’oeil. These characters are living shadows, Aérosol claims, acting as a mirror for those who see them. More so, the viewers have a tendency to identify with images. For example, his Sitting kid speaks to anyone, from kids themselves, adults thinking about their own children, to older people, reviving some distant memories.

Speaking of icons, Joe Strummer, Johnny Cash, Sid Vicious, Jimi Hendrix, David Bowie, Brigitte Bardot, Curt Cobain, John Lennon, Patti Smith, Mick Jagger, Elves Presley, Gandhi, James Dean, Keith Harington, Jean-Michael Basquiat, Jackson Pollock, Marcel Duchamp, Bob Dylan, Jane Birkin, Robert Smith, Robert Plant, and many more, all of them painted in human-scale, exactly the same as his anonymous figures, reversing their status to the level of the ordinary people. Every single portrait, every single face represents Aérosol’s hero, be it a movie star, musician, or a fellow artist. Even the anonymous characters carry a specific meaning for Aérosol. Considering this, his collaboration with Lee Jeffries came almost naturally. The artistic chemistry was sparked between the two masters, one photographer, the other a street artist, when they met in London in 2014. Jeffries’ portrait of the homeless people had a powerful impact on Aérosol, who proposed a collaboration that culminated in the Synergy, an exhibition held at Mathgoth gallery in March 2015. The joint exhibition shows and further explores their mutual affection for creating portraits, combining their respective talents, and forging a strong relationship between stencil art and photography.

The viewers have a tendency to identify with images

Red Arrow and the Perfect Location

The famous Red Arrow came a little by chance in the 80’s and has since become a trademark, Aérosol’s second signature. It’s a very urban symbol, a recognizable sign of the international urban signage. Its geometric shape made of lines and angles contrasts with the curves of his human figures, and the redness points to a detail or to the entire piece, attracting the eye toward his black and white silhouettes. Many have tried to unearth a different explanation, but there is none, the artist claims.

Speaking of the perfect location for a new artwork, Aérosol doesn’t have a strict set of rules, which he then universally applies. It’s more about the traveling itself, letting go of all the preconceptions, walking the streets, seeing with your own eyes. There is, however, one peculiar rule the artist always abides – whenever he paints without explicit permission, it’s always with great respect for the context, the places, and people. For example, when he worked in places with major historical and cultural significance, like Venice or the Great Wall of China, he did all he could do to avoid being seen as profane or even provocative. In truth, it’s the exact opposite for him. There was no way he could disrespect the history of the old stones, so the artist painted on the paper tablecloth, which is light and fragile material. The properties of the paper allow its bonding with the stone, providing a perfect illusion of a piece painted on the wall. Over the years, murals have become another trademark of his, whether he’s doing them alone or is collaborating with others. Comparing the sense of belonging of such a piece with the one he painted himself, Aérosol says there is no difference at all. It’s the same with the type of work – live-scale street stencil, an enormous mural, or the gallery piece, it’s all the same to him. It’s all his.

The Red Arrow has become a trademark and his second signature

After working hard and fruitfully for an almost a decade, he slowed down in 1992. Due to the teaching responsibilities, making music, buying a house, and being a father, Aérosol made fewer stencils on the streets. In 2002, he returned to the streets with a clear perspective and human size pieces, now thought of as his usual. In 1986, he wrote the very first book on the subject of street art - Fait, Bien Fait, or Done Quickly, Done Well in English. Nowadays, he’s busier than ever, with schedule booked until the end of the year, like it was in 2014 and 2015. There’s simply no time for everything he wants to do – he stopped playing music, gave up teaching as well. All of his creativity and strength is poured into his art, and as long he’s able to produce, he’ll be doing so.

He is represented by Galerie Zimmerling & Jungfleisch in Saarbrücken, Germany, Wunderkammern in Milan, Wunderkammern in Rome, Galerie Martine Ehmer in Bruxelles, David Pluskwa Art Contemporain in Marseille, The French Art Studio in London and Galerie Laurent Strouk in Paris.