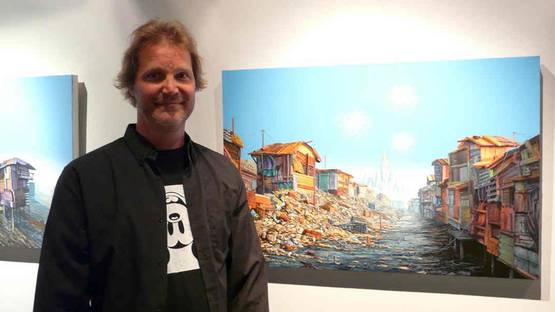 Childhood idols and memories in the work of Jeff Gillette seems to represent the milestone of experimentation and articulation of the artist's social and political standpoints. The staggering boldness and irony are the most important tools the artist uses to settle his almost black humor world view. The very message that Gillette is eager to send is embedded in the imaginative and playful process respectively on the edges of reality and illusion. The satirical narratives he produces suggest the high level of awareness of not purely political, rather of economic, social, geographical context.

Jeff Gillette was born in 1959, in Detroit. As a child, at his home, he was exposed to the TV show The Wonderful World of Disney and adorned it. After facing the amusement park in the Orange County in 1978 he was extremely disappointed with the vanity of the sight and since then became somehow dazzled with the Disney iconography. The art school in Detroit was challenging, yet Gillette decided to join Peace Corps in Nepal. During that time the artist was faced with nearby Calcutta's shantytowns in his spare time. The return to the homeland was marked by a move to Orange County in 1993 when a teaching position at Foothill High School in Tustin appeared where he still teaches art today. From 2012 onwards he traveled and visited numerous favelas, barrios, bastis and shantytowns, experienced urban blight and incorporated that into his works.

The opus rounded with wit and precise critique

The enchantment with Disney came as a natural extension of Gillette’s initial interest in Pop Art. First, it was Mickey Mouse that draws the artist attention primarily because of his simple, yet likable and simple features. Still, steady school job provided him with enough time for further development of ideas. Since Mickey is an iconic figure and somehow embodies Disney spirit, it is no wonder that Gillette produced a number of paintings with him alone. Second best is Minnie Mouse and from time to time other characters like Donald Duck, Cinderella or even sporadically ones.

Apocalyptic scenes which are reality in some parts of the world

Although, facing extreme poverty is always defeating and unpleasant experience, Gillette was fascinated with the poetical potency of seen sights. The sharpness of space, color, form, and texture, constitute some kind of strange visual spectacle. The vast garbage and filth landscapes seem to suggest existential urge as well as the astonishing possibility of human adaptation. Those initial impressions from the 80’s apparently had an immense effect on Gillette and kind of became attached to such an imagery, so those visits became frequent and led him forward into thinking his art.

Gillettes's works are provocative and subversive

Gillette came up with the finalization of his thoughts on the meaning of consumerism and a manipulative role of brands even in the case of children. By contrasting the imagery of wasteland settlements from Third world countries with Disney characters, Gillette is producing rather engaged and eerie comment on today’s society. In addition to that is an interesting aspect that the artist now lives and works in the shadow of nearby Disneyland in Anaheim, and his students frequent that fantasy realm. On the other hand, his thoughts are framed by both the Buddhist notion of life being suffering and the wisdom of German philosopher Arthur Schopenhauer’s thinking that a way to end is both through aesthetic and artistic contemplation.

In 2015 Gillette was contacted by the Banksy’s manager via social networks. Namely, the world's famous street artist asked for his several works to be sent due to large group exhibition that was preparing. It was a success and Gillette’s works were sold quickly. Afterward, the artist was called to participate in Banksy’s secretive installation that he was setting up in Weston-super-Mare, UK, three hours from London. Upon arrival, Gillette was perplexed that the whole concept was basically a copy of his 2010 exhibition Dismayland. The artist then decided to use imagery of Banksy’s theme park and insert it in his work.[1]

The continuum of Gillette’s art practice tells much about the effort of maintaining consistency in regards to his personal aesthetics. The use of rather classical painting technique, references to art history from realism to modernism and contemporary topics make his approach progressive and critically inclined. His paintings are strong metaphors of repressive mechanisms of almost every layer of today’s society.

Featured image: Jeff Gillette in front of his artwork, image via Arrested Motion
All other images for illustrative purposes only