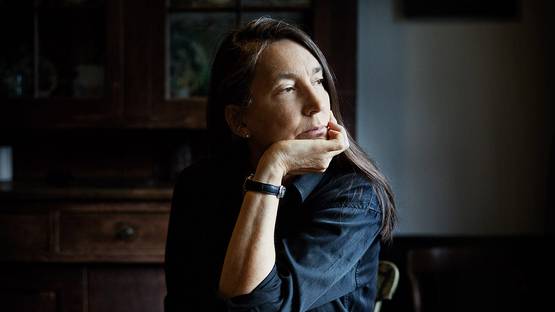 Jenny Holzer is an American conceptual and installation artist who became widely known because of her Truisms series of short aphorisms.  In her insightful art consisting of brief punchlines, Holzer uses the rhetoric and vocabulary of modern information systems and she addresses the latent politics found in these systems. Holzer belongs to the feminist branch of the artists that emerged in the 80s, just like Barbara Kruger and Cindy Sherman. Similarly to the other artists belonging to this movement,  Holzer explores new ways to make narratives using a visual medium.

Moving from Ohio to Manhattan

Holzer was born in Ohio, into a family of two generations of Ford auto dealers. She completed her undergraduate degree at Ohio University in Athens after attending Duke University and the University of Chicago. While enrolled in the Rhode Island School of Design, Holzer experimented with an abstract painting style influenced by the color field painters, such as Mark Rothko. In 1976, she moved to Manhattan, participating in the Whitney Museum's independent study program. After 1976, she started working on innovative projects which combine the use of language, installation, and public art.

In 1977, Holzer began her first truly public project, Truisms. This break-through series consists of provocative one-line aphorisms printed in an italic bold font, confronting the viewer through the unsettling element of truth in each proclamation, such as men are not monogamous by nature and money creates taste. Such concise allegations elicit public discussion, directly engaging viewers in a larger discourse on society that often broaches polemical issues.The medium of modern computer systems became an important component in Holzer's work in 1982 when nine of her Truisms flashed at forty-second intervals on the giant spectacolor electronic signboard in Times Square. Sponsored by the Public Arts Fund program, the use of the L.E.D. (light emitting diode) machine allowed Holzer to reach a larger audience. At the same time, she started printing Truisms on posters, T-shirts, and stickers, and she also carved them into benches, which significantly contributed to the public spreading of her artworks.

In 1981, Holzer began working on her Living series. The main topic of this projects are the necessities of daily life, such as eating, breathing, sleeping, but also relationships. The artworks were printed on aluminum and bronze plaques and their short messages were accompanied by paintings of Peter Nadin, whose portraits of people attached to Holzer's messages emphasized the emptiness of both life and communication in the digital age.The multimedia extravaganzas of Holzer's later installations, such as the 1989 Guggenheim exhibition, are exemplified by a 535-foot running electronic signboard spiraled around the core of Frank Lloyd Wright's architecture, flashing garish lights on the monumental stone benches arranged in a large circle on the floor below. In 1989 also, she became the first female artist chosen to represent the United States at the Venice Biennale. For the Biennale Holzer designed posters, hats, and t-shirts to be sold in the streets of Venice, while her LED signboards and marble benches occupied the solemn and austere exhibition space. She received Golden Lion that year, but also made a new series of works, called Laments.This series is inspired by the birth of her first child and it is perhaps the most personal series she has ever had done. Laments is dedicated to an unusual outlook on  motherhood, violation, pain, torture, and death.

Holzer withdrew from the art world for a few years and then returned in 1993 with a fresh approach to her work and a new emphasis on the immaterial. In 1993, she partook in a virtual reality exhibit at the Guggenheim Museum. The following year she produced her next series, Lustmord, which opened at the Barbara Gladstone Gallery in New York. Her more recent work, from 2007, called I Was In Baghdad Ochre Fade, is based on the  transcriptions of documents from the Iraq War while her Redaction Paintings series from 2008 features declassified memos and much of the text is blacked out and censored. Holzer has exhibited extensively throughout the United States and Europe and she has also published several books, such as A Little Knowledge (1979), Black Book (1980) and Hotel (1980). She is also well known for her parody Twitter account, which she uses to share parental wisdom in a similar way to her art. When asked about her opinion on her own work, Holzer replied -  If you are an artist and you are honest, you are never good enough.

Linguistic Ambiguities as a Means of Protest

The main topics of Holzer's work are violence, oppression, sexuality, feminism, power of war and death. The artist is emphasizing and bringing to light important issues of the capitalist society by cleverly commenting on sexual identity, gender relations and a variety of political and existential issues. Her entire work is a unique social critique and protest art which aims at subverting common hierarchy while her main tools playfully visualized linguistic ambiguities. Holzer remains an active artist whose works are regularly sought when it comes to modern art marketplace.

She is represented by SCAI THE BATHHOUSE Tokyo.