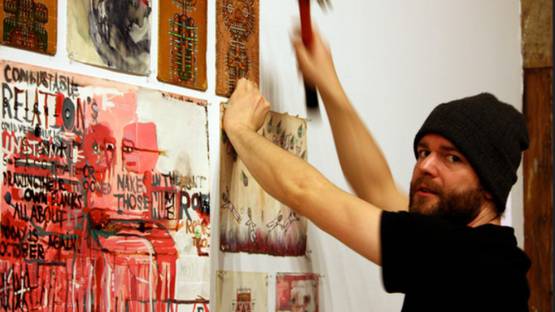 Jeremiah Maddock is a Brooklyn-based artist who uses aged book covers as a template for his intricate drawings. Jeremiah's artwork reveals hypnotic patterns and a color palette that dialogue with the details of everyday personal experience. Maddock grew up in Tacoma, WA and moved to San Francisco where he stayed for 10 years. Then he headed up to Whidbey Island, WA and the last 5 years he lives in NYC.

Jeremiah Maddock is a self-taught artist who currently lives in New York. He finds it difficult to recall a time in his life when he wasn’t creating. Inspired mostly by people and nature, especially repetition—whether it be musical or visual—Maddock’s art is born of the desire to make sense out of chaos and turn structure into static process. Each line in the work is a response to the one that preceded it. His works are an attempt to create the purest expression of existence, totally free from external conditioning and undefiled by compromise. His language is a crystal-clear spring flowing with Machiavellian-like "musical hieroglyphics." At times disconcerting, his works possess a certain candor and delve into the perception of the supernatural.

Maddock creates richly patterned mixed media works populated with ghoulish creatures and tramps, that are likely a product of his obvious lack of desire for external validation. It’s clear that he maintains a very pure process; he is interested more in the act of creating - and the motivations behind such an act- than any finished product.

According to Maddock, making art has always been a big part of him even long before he was aware that he was making “art”. Even when there is no product to show for it, he was always making something into something, in his head. The process in general is pretty organic- stream-of-conscious rant, in a way. It’s pretty rare for him to sit down and knows what he is going to do, he get bored really quickly and that work goes to the trash. He just starts, and if all goes well he can’t stops until he physically can’t do any more. Those are the best times for him, and he is addicted to that journey and exploration.

Although concepts occasionally reveal themselves to Jeremiah as he works, they’re often very vague. What the viewer may perceive as a recognizable symbol reveals itself to Maddock more like musical punctuation—subtle and lingering nearby with some abstract intention. And while the work as a whole may seem to tell us an elaborate story, none of it is preconceived. Mostly spontaneous and a bit obsessive, the work manifests from the artist’s almost trance-like drawing sessions onto found aged papers and recycled book covers that act as a receiver of the inks he mixes from dead pens and markers.