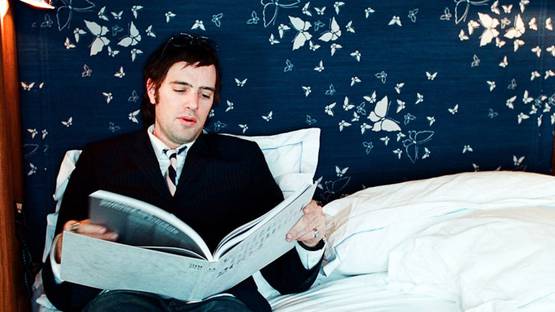 Jeremy Blake was an American digital artist and painter, born in Oklahoma in 1971. The talented and promising artist committed suicide in New York City in 2007, only one week after his girlfriend ended her life. Their deaths stunned their friends, captivated the artistic world and fascinated the press, causing speculations and conspiracy theories.

Blake completed his undergraduate studies at School of the Art Institute of Chicago in 1993 and obtained his Master of Fine Arts degree from California Institute of the Arts in 1995. He began making a name for himself in the late 1990s with his large, semi-abstract digital projections that were neither photographs nor paintings. These geometric forms with photographic images were reminiscent of movie scenes. Later, he started creating digital video sequences that were neither films, not paintings but appeared to be both. Blake called his works “time-based paintings”. In 2000s Blake started including narrative and documentary elements in his works. The Winchester video trilogy, shown at the San Francisco MoMA in 2005, told the story of Sarah Winchester’s Mystery House in San Jose, California. The widowed heiress to the Winchester fortune built a mansion full of mazes and dead-end staircases in order to protect herself from ghosts haunting her.

Blake started including narrative and documentary elements in his works, 2005

The diaries of Ossie Clark, English fashion designer, responsible for creating the mod look in the 1960s were Blake’s source of inspiration for a 2003 work at Feigen Contemporary gallery. In addition to that, he contributed his artwork for Beck's album Sea Change and created trippy, abstract sequences for the film Punch-Drunk Love, directed by Paul Thomas Anderson in 2002. The artist explored various themes in his works, such as violence, glamor, cultural personifications, combining abstraction and representation in fresh and exciting ways. Blake's works have been exhibited outside the United States. His works have been held in 14 museum collections and included in three Whitney Biennials. He was recognized as one of the first to merge painting and digital world.

The artist explored various themes in his works

Jeremy met Theresa Duncan in D.C. in 1994. One year later, they ran into each other backstage at a concert and shortly after became an “It” couple, popular in the artistic circles. Their deep and devoted relationship lasted for 12 years later, until their deaths. Duncan and Blake were madly in love and very protective of each other. Their friends could not recall that the couple ever had any conflict, they were a "dynamic force", always together. Theresa was freelance essayist, cultural critic and computer game designer, who made a name for herself with CD-ROM games Chop Suey, Smarty and Zero Zero, which attracted a cult following among girls. Five years older than Blake, she was also known for her blog the Wit of the Staircase, where she wrote about her cultural obsessions, ranging from Kate Moss to perfumes. The couple was perceived as attractive, intelligent and knowledgeable, which just made the abrupt end of their lives even more shocking.

Seven months prior to their suicides, the couple moved from Los Angeles to New York. Their friends thought that it was due to Blake's new consulting job at Rockstar Games, Grand Theft Auto franchise creators, or maybe because Theresa was tired of narrow-minded Hollywood executives who didn't share her artistic vision, or simply because they missed New York. They lived in New York for many years before moving to Los Angeles. However, there was something else. Blake and Duncan started displaying unusual, erratic behavior, they were growing paranoid and blaming the government and Scientologists for working against them. They were so sure that the Church of Scientology was conspiring against them, that they prepared a lawsuit against the church which they never filed, a 27-page document in which they accused Scientologists of harassing, following and threatening them. And not only the church, but also Tom Cruise, filmmaker-artist-author Miranda July, writer-director Paul Thomas Anderson, former Viacom Chief Executive Tom Freston, rock artist Beck and Art Forum Editor Tim Griffin and many of their friends and neighbors.

It all tragically ended when Blake found Theresa dead in their apartment, overdosed on a lethal cocktail of whiskey and Tylenol PM. Apart from a bottle of pills and alcohol, there was a suicide note, saying “I love all of you.” A day before Theresa Duncan's funeral, Blake was reported missing. His clothes, wallet and a short, hand-written suicide note were found on a beach in the Rockaways, in Queens. Police searched for him for days, hoping that he is still alive. However, five days later, the body found by a fisherman in the waters off Sea Girt was identified as that of Jeremy Blake, and the cause of death was presumed to be suicide. He was 35 years old. The artist’s father, Jeffrey, died when Jeremy was 17 years old. He lived with his mother, a half-sister, and a stepfather.
His work is now represented by ZooArt Gallery