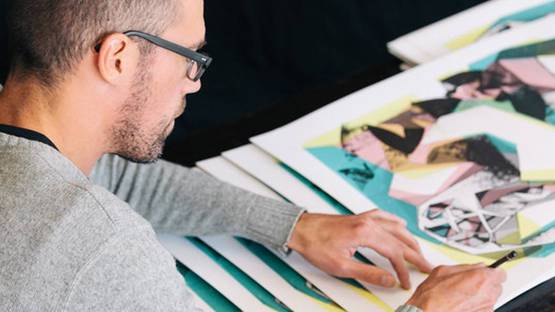 Jeroen  Heeman, also known as Jeroen Erosie, is a Dutch visual artist, born in 1976. He is best known for his cycle tags, illustrative style and perfect circle. Jeroen always develops progressive ways of artistic expression. His style addresses different disciplines such as graffiti, conceptual art, illustration and typography, among others. He connects these seemingly segregated areas in a natural, personal process, reflecting his thoughts, doubts and experiences while constantly evolving his visual output.

Erosie graduated with honours from the Willem de Kooning Academy in Rotterdam. He started doing graffiti in 1993 and later started as a professional illustrator. These two worlds naturally led him to join texts and images in his work and expand the territory of different visual and conceptual fields. Wall paintings, typography, drawing, painting, a non ending-game with one motto: artistic freedom. Over the years he gradually developed a more abstract visual language as a prolific artist while still maintaining his trademark craftsmanship.

The bright and playful pieces reveal a little of Heeman’s background through his use of spray-paint and latex, shapes loosely based on letters and techniques going back to his days as an illustrator. At the same time they form a discontinuation, both conceptually and visually. Heeman is always questioning his practice in order to re-invent himself and to discover new compositions, forms and figures. This tension between alienation and attachment is the means and the end of his creative process.

His works are often politically and socially motivated, and range from the relatively minimal to the elaborate and grandiose. Erosie is also the aritistic director of 3024, a record label founded with his friend and musician Martyn.

He currently lives and works in Eindhoven, the Netherlands.