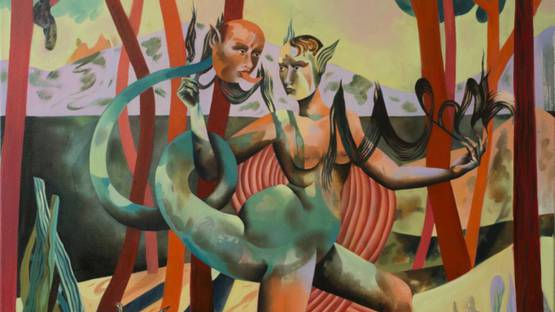 A London-based artist, Jessie Makinson is best known for her humorous, fanciful, and at times unsettling depictions of female figures. Her practice spans paintings, drawings, ceramics, and installations.

Makinson is born in 1985 in London, where she still lives and works. She studied drawing and painting at Edinburgh College of Art, graduating in 2007, and undertook the Drawing Year Postgraduate Programme at the Royal Drawing School, London, in 2013. In the same year she was awarded the School's Moritz-Heyman Artist's Residency in Tuscany. She was the recipient of the Sir Denis Mohan Award for 2014-15, and in 2016 was the winner of the prestigious Marmite Prize for Painting.

Makinson's paintings are densely packed with strange animals and folklorish humans, all executed in a wild color palette. Her characters engage in a range of activities, from mundane to otherworldly. Referencing classical mythology, art-historical canons, science fiction, and contemporary popular culture, the artist examines and redefines the roles and narrative possibilities of women in art. Her process begins with random drawings on the blank canvas, expanding from there based on the patterns the drawing suggested. She then covers the work with a thin wash of diluted primer so the color is not so obvious when she comes to paint over it. For the artist, this process works as a method of generating ideas, as with each shape, form, color, figure placed, the narrative will shift.