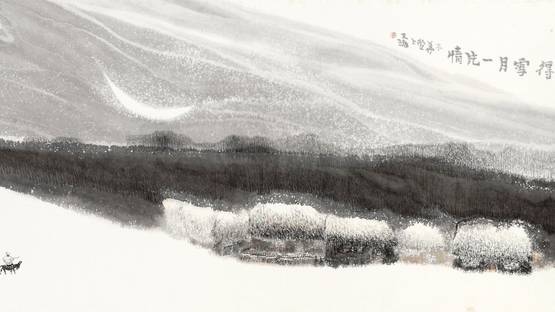 Jia Youfu is one of the most successful and noteworthy artists in the field of Chinese landscape art, noted for his cloudy, atmospheric and monumental traditional landscape paintings.

Jia was born in 1942 in Suning, Hebei. While studying in Central Academy of Fine Arts from 1960 to 1965, he learned the foundation of landscape painting and the techniques to depict nature under professors Li Keran and He YiXia. It was the era of the Cultural Revolution in China, and there was very little interest in the culture and art due to anti-nationalism. However, Jia maintained the deep interests in traditional art and systematically studied the traditions of landscape painting, elevating the spirits of the traditional Chinese paintings and polishing up his technical skills. Transferred to the Central Academy in 1977, he subsequently became professor of traditional landscape painting.

Jia Youfu’s oeuvre emerges from a combination of traditional ink-wash aesthetics and personal experience. The Taihang Mountains series stands as a turning point in Jia’s artistic career. He visited the mountain for the first time in 1964 as he was preparing for his graduation project. The artist was deeply moved by its grandeur. He went on to climb the mountain about 20 times, each time experiencing the deep, inner beauty of nature. He said that by climbing the mountain and recreating its spirit through the works, he was able to realize the true meaning of the art. These paintings explore the atmospheric moods of Taihang’s majestic scenery in which the intense light and vast expanses of poured ink clouds dwarf any human presence. The mountains are transmuted into large, coarse and forbidding textured strokes where the sheer faces of the rock are made to symbolize its inhabitants’ rugged spirit of resistance. In some other paintings, the mountains are textured with finely peppered strokes that surreally metamorphose into tranquil, dormant human figures.

His work has been featured in various exhibitions and publications throughout China and the world – in France, Switzerland, Japan, Korea, Russia, India, Canada, and Singapore.

The artist currently lives and works in Beijing.