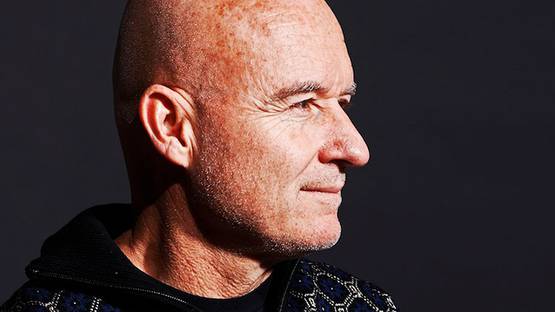 Jim Hodges is an installation artist from Spokane, WA. Hodges explores the capacity for his materials to elucidate his own creative urges, which can be seen in the wide array of forms his work takes. Hodges is known for his singular ability to infuse emotion and narrative into the objects of our daily lives, creating poignant studies on ideas such as temporality, life, and love.

Hodges was born in 1957. He received his BA from Fort Wright College in 1980, and his MA from the Pratt Institute in 1986. Since the late 1980s, he has regularly shown his work in the United States and Europe, including at the Whitney Biennial in 2004. In 2006, he was awarded a prize by the Association Internationale des Critiques d’art (AICA).

Since the late 1980s, Hodges’ poetic reconsiderations of the material world have inspired a wide-ranging body of work. From the delicate nature of early wall sculptures—including Diary of Flowers (1994), composed with hundreds of doodled paper napkins, and Changing Things (1997), made from disassembled silk flowers pinned to the wall—to the large cut-paper photographs of flowering trees, gold-leafed newspaper pages, and light-filled mirror mosaics of the past decade, Hodges’ art typically begins as humble, even overlooked materials that are transformed through his touch. These acts of subtle transmutation, which have a relationship to sculpture as well as drawing, elevate his pieces to other levels of interpretation and meaning.

Hodges acted as the chair of the Sculpture Department at the Yale University School of Art from 2011 to 2012. In 2005, his collaborative callboard Don’t Be Afraid, was installed at the Hirshhorn Museum and Sculpture Garden in Washington, D.C. Also in 2005, Hodges created his piece Look and See for Creative Time’s Art on the Plaza. The piece is a massive stainless-steel screen painted with a monotone camouflage pattern. The work was bought in 2007 by the Albright-Knox Art Gallery in Buffalo, NY. A retrospective of his work was presented at the Walker Art Center and Dallas Museum of Art in 2013 and 2014.