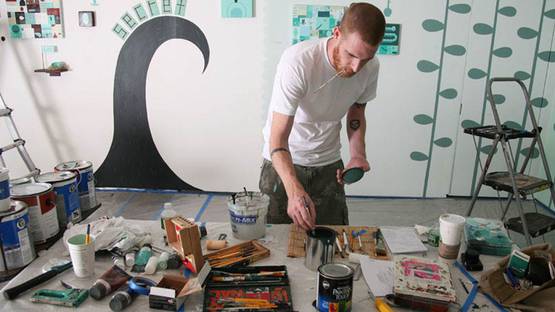 Best known for his works in installations, painting, sculpture and collage, Jim Houser is an American self-taught artist and one of the original members of a group Space1026. Houser was born in Philadelphia in 1973. His art explores words and the semantics of them; he tries to delve into specific sound arrangements, and the meanings these words bare, both the denotation and connotation. Through Jim's art, we can observe the intricate relationships of the elements of his paintings, through his artistic language that emerges.

When it comes to his installations, Houser uses them as his own thought-tracking and recording process. They explore a variety of themes, like the truthfulness of speech, science fiction, illness, flora and fauna, music and the process of creating music. The artist manages to fuse together his personal iconography and visual poetry, including the topic of art-making as well. Throughout his art, Houser accentuates the importance of art to him, and how it has become an integral part of his life.

The Art of Collage

Jim's collages serve as a sort of medium for expressing is most private thoughts and feelings. He does this through his signature icons and pictures, a mix of geometric shapes, stylized figures and self-made typography. When put together, the elements of Houser's collages reveal an extraordinary complexity and interconnectivity, becoming a whole, and conveying the message on a broader scale.

The elements of Houser's collages reveal an extraordinary complexity and interconnectivity

Houser's artwork has been displayed worldwide, at different venues in the US, Brazil, Australia and Europe. Some of the more notable exhibitions include We'll Make a Lover of You, a 2006 group show organized by ArtCenter of South Florida in Miami; a 2008 dual exhibition titled Awful Mountain, which Jim did in collaboration with Richard Colman in San Francisco; and Search Party, a 2013 solo show, organized and held at Jonathan LeVine Gallery in New York. Jim's work is a part of Philadelphia Museum of Art collection, and the Philadelphia Academy of Fine Art collection.

Jim Houser resides and creates in Philadelphia, US.

Featured image: Jim Houser in his studio
All images copyright of the artist