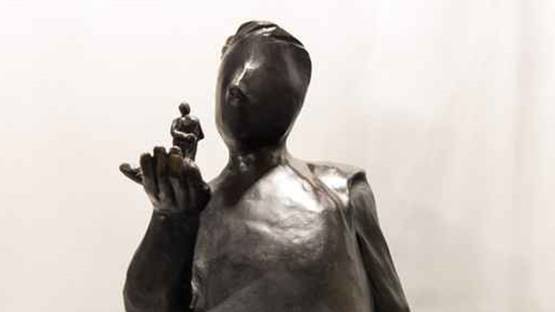 Jim Rennert is an American artist best known for his immediately identifiable and simplified figures and forms depicting men in suits. He spent 10 years as a businessman but was finally inspired to embark on his artistic path as a sculptor in 1990. His recent work has been focused on his past experiences in the competitive world of business. Mixing the traditional medium of bronze and contemporary forms of flat laser-cut steel, Rennert has illustrated themes and concepts of everyday work life. There are also briefcases, ladders, suits, and forms resembling buildings, all of which are an iconic visual representation of the business. He has also used sports and other physical activities as a metaphor to express the daily struggles and achievements of the contemporary businessman. While not everyone wears a suit or is a businessman, Rennert’s works transcend their seemingly narrow subject, allowing the audience to relate to the sculptures in a very personal manner.