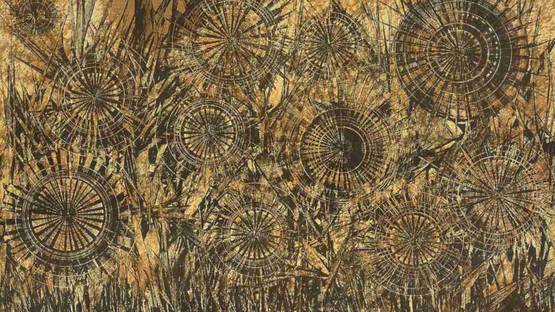 Born in 1920 in Cologne, Germany, Ernst remained living with his mother Luise Straus after the divorce. After visiting his father in France in 1930, he met many artists such as Luis Buñuel, Salvador Dalí, Alberto Giacometti, André Masson, Joan Miró, Man Ray and Yves Tanguy, as well as his father's lover Leonora Carrington. He studied printing and typography before immigrating to the United States in 1938 to escape the Nazis. Ernst became director of The Art of This Century Gallery in 1942. A year later he had his first one-person exhibition. In 1943, he opened Norlyst Gallery with Eleanor Lust, which also hosted three solo shows by Ernst.

Ernst's early canvases were tinged with Surrealism, while his first solo show featured organic abstractions. Inspired by jazz, he used discrete color areas to approximate syncopation and rhythm. During the 1950s, he began experimenting with line, which determined his future directions. His mature works feature complex inter-locking webs of lines that formed architectonic structures. Always abstract, his later paintings evoke the spatial quality of panoramic cityscapes.