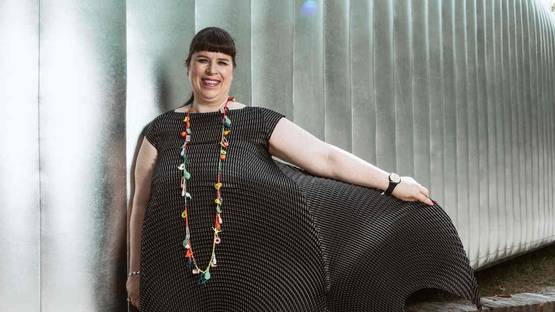 The occupation with ephemeral and theatrical effect in the work of Joana Vasconcelos is a strategy conceived to provoke and question social and political implications of everyday life. The way she conducts her large-scale projects based on working with delicate materials makes her practice aimed at examining the notion and heritage of female crafts. By devoting oeuvre of hers to the signification of problematic places of gender or class seclusion, Vasconcelos has derived herself from just being a commercial artist, rather the effort of careful thinking and cunning processing make her practice relevant and progressive in terms of the global art scene.

Joana Vasconcelos was born in Paris, in 1971. Her parents fled from Portugal due to the dictatorship of infamous Salazar which was present at the time. While growing up she was inclined in passion for both karate and art. Some years later, since the family returned to Lisbon after the changes Vasconcelos studied at Centre of Art and Visual Communication from 1989 – 96. The startling focus and dedication led her to exhibit rapidly from 1994 onward around the Europe and over the years established recognizable aesthetics.[2]

The tradition of female craft transferred in modern context

Joana Vasconcelos approaches the process of work with diligence and uses methods of appropriation and deconstruction of different references in order to gain the greatest results albeit condition by the media she is engaged with. Whether it is an installation, sculpture or video, Vasconcelos operates with the displacement of meanings and relevance of what is and can be feminist work of art. There is a strong resemblance with the art of Pop art and Nouveau Realisme. By being critical about consumerist society, traditional canons of representation or colonialism, the artist inscribes coherent narratives which are dealing with contemporaneity.

Two major events that changed the course of Vasconcelos’s career happened year after year and provided the possibility for her work to become visible on the international scale. In 2005 the artist showed the work titled The Bride on Venice Bienalle and it was a humongous chandelier made of over thousands OB tampons. In 2012 she was summoned as the first woman and the youngest contemporary artist to exhibit in the Palace of Versailles. That was followed by the subtle attempt at censorship since some of her pieces were too indecent for the palace, which did not jeopardize her determination to manage the whole installment and was a complete success.[2]

The artist is known for the use of wool, fabrics and crochet

In the past following years, Vasconcelos realized several public art interventions mostly in Portugal and Paris, and her colorful objects became part of private and public collections, from Museum of Art in Seoul, over respectable institutions in France and Spain, to National Museum of Women in the Arts, Washington DC. The complete success the artist achieved with her floating work, a boat installation, on 55th Venice Biennale in 2013, which represents the high range in regards to deployment of her career. Exuberant, witty and alluring objects and installations show the continuum of polished and well-thought practice which substantially embedded in contemporary social and political topics.

Featured image: Portrait of Joana Vasconcelos, photo credit Swatch
All other images courtesy of the artist