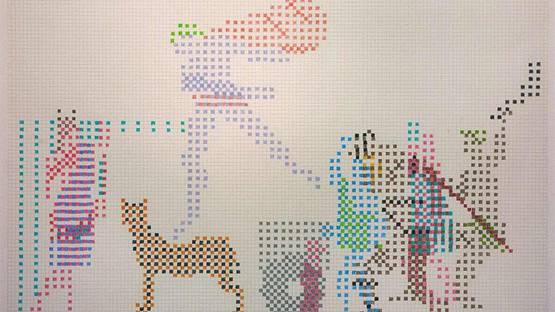 A celebrated Op artist, John Goodyear created a substantial body of work that lends itself to both reflection on the inner self and discovery of the outside world. Throughout his career spanning over six decades, he re-contextualized the viewer’s present observation through painting, drawing, light, optics, installation, and heat.

Born in Los Angeles in 1930, Goodyear won a full-tuition scholarship to the University of Michigan, Ann Arbor, graduating with a Bachelor in Design in 1952. While serving two years in Japan during WWII, he got acquainted with Japanese architecture and Zen Buddhism that led to the sparse ambiguity that would go on to characterize his work.

“Art makes one see, what one sees makes art,” Goodyear once said. In the late 1950s, he began to paint in the three-dimension, resulting in works that fluctuate between painting and sculpture, engaging the viewer to participate. His later works were comprised of open grids behind which hangs a canvas, which would be activated by the touch of the hand or a walk-by to create optical movement, illusions of perspective, and shimmering colors.